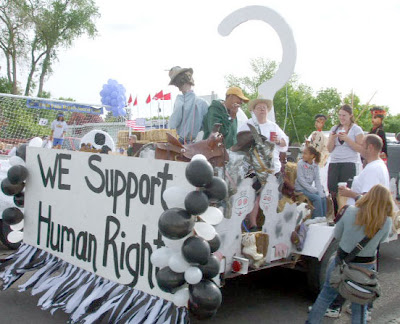 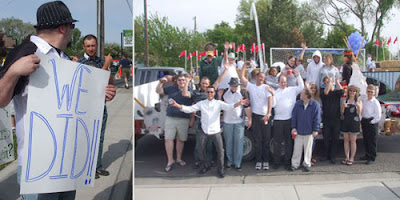 Members of the Idaho Gay, Lesbian, Bisexual, Transgender and Allie community on board the stripped down renamed version of the original float. I wonder if the child riding on the backs somewhat distressed by the lack of rainbows?

The Western Pride event organizers mandated that all bright colors be removed and any reference to gay be removed to reflect a more "conservative community" in Idaho Falls Idaho. According to local reports Lisa Cuellar, Western Days board chair and Mary Ann Taylor, parade coordinator demanded that the name on the float be changed. In order to comply with this demand the Southern Idaho Gay Lesbian Gay Bisexual Transgender Community Center temporary renamed its self the Southern Community Center.

Before joining the festivities the SIGLBTCC had to pass one more hurdle. Or should we say a Military Shakedown.
The National Guard conducted a inspection and certification of compliance.

Responders to articles in local papers have applauded the bravery of the Twin Falls community as a beacon of liberty for all regardless of Sexual or Gender Identity, Race, Creed or National Origin.

The organizers of the Salt Lake Utah Pride have noticed this bigotry imposed on there northern friends noting that there is plenty of room for everyone in the Utah celebrations.

I find it despicable that bigots and haters are in positions of influence in America.
I applaud the courage and faith of our GLBT community.
We have plenty of room for everyone in our Texas Pride celebrations. So Ya All come on down!

And we would not steal your rainbows.
Posted by planetransgender at 11:07 AM 1 comment: Links to this post