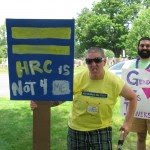 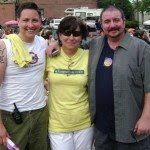 Sylvia Rivera would be proud today and I have no doubt she is smiling upon us; as so many trannies, gender non-conforming, genderqueer and whatever other labels one decides to ascribe to themselves gather here to make a visible statement that OUR TIME has come and we control OUR DESTINY.This Trans Pride March and Rally, which is a statement of VISIBILITY and Empowerment, has special significance not solely because the Trans movement for Employment equality has been sold out by the established corporate indoctrinated gay organizations and politicians; BUT also because of the decades of Trans oppression that our sisters and brothers have experienced!

The rebellions of the sixties, like Stonewall and Compton, were lead by queens, kings and many gender expressive queers as a result of decades of brutal police brutality. However as the Gay Activist Alliance took foothold in the Gay community during the early seventies; the trannies, the dykes, the queens, people of color, street people were cast aside. At the 1973 Pride rally in NYC, Jean O’Leary denounced street Transvestites as men masquerading as women. At that PRIDE, Sylvia Rivera took the stage, almost by force, to express her outrage at the established Gay community for ignoring our trans brothers and sisters in the prisons, on the streets, and in the growing margins of society. Sadly that same evening Sylvia slit her wrists, and would have died, if her long time friend and co-founder of Street Transvestite Activist Revolutionaries (STAR) had not taken her to the Emergency Room. During the sixties and seventies, Sylvia and a small cadre of Trannies bravely fought for Gender Expression and multi-issue queer advocacy, though were marginalized by the assimilist gay community, as were the radical queers in the Gay Liberation Front. In the decades that followed, Trans folks persevered and continued our struggle for equality in spite of the Lesbian Backlash, selling out of Trans rights at the expense of Gay rights and our community being told to wait at the bus station of equality while our good gay and lesbian comrades moved forward without us!

I and many of us are here today TO REMEMBER our past and present Trans comrades who have been fighting a system of oppression that wants to keep an oppressive boot on our collective Tranny necks! We are here today to fight this system of oppression and to say We are Out, We are Proud and we will not take a seat in the back of the bus for Equality! In fact, we don’t need to ride on anyone else’s bus for we are our own power.

One case in point is that both Massachusetts and Connecticut Trans communities are leading the way to assure passage of legislation that will add Gender Identity and Expression within our States non-discrimination statutes. We CANNOT rely on any other community to advocate for us; that we hold the power to our Equality, NOT HRC, Not Gays, Not Lesbians, but us Trans and gender non-conforming folks. However if HRC or any other non-trans organization wants to be at OUR tables of Power, we welcome them as long as they understand what true collaborative work is. And that Gender Identity and Expression is not a dirty word that takes folks time to understand, but that most ALL OF SOCIETY is Transgress Gender to some extent and are by definition Transgender!

However, at the same time we must not get consumed into single issue politics, such as ENDA or Non-Discrimination for we cannot fall into the Marriage trap of single issue politics! We must remember and advocate for needs of ALL of our communities not simply the privileged few. We must be advocates and allies of our many homeless, immigrant, incarcerated, unemployed, differently abled comrades; and that though all our communities have unique differences our rebellion to an oppressive state and society is our bond.

Finally it is imperative that we remember that legislation alone does not affect fundamental Social Change! Laws, politicians and lawyers, though critically important to a movement, will not stop the oppressions that occur and that we must educate, lead by example, build strong and diverse coalitions, and become daily advocates, activists and revolutionaries in the Trans RIGHTS Movement!

Peace Love and Solidarity
Posted by planetransgender at 8:23 PM No comments: