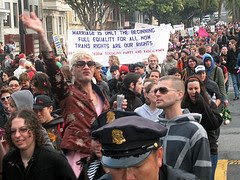 San Francisco Califonia
The city by the bay has once again lead by example and is the consciousness and eyes of the American GLBT people in rejecting Joe Solmonese and HRC's unrepentant gender exclusionary policy.


Among the speakers was Donna Rose who said she joined HRC because she believes in Equality, Integrity and Principle. She then said she later left HRC for the same beliefs.
We in Dallas look forward to seeing Donna at the Dallas Black Tie and to hear her again express these outstanding Ideals.
In 2007 the Dallas Black Tie resulted in a $1.27 million net distribution, the largest distribution of any gay and lesbian fundraising dinner in the nation. A high percentage of the proceeds are allocated to local recipients but HRC does receive a very nice share.

It is understood by those of us who strenuously object to HRC's gender exclusionary policy that this opportunity to educate and inform the Greater Gay and Lesbian community cannot be missed.

I contacted Randy Ray, HRC member and CO-Chair of the 2008 Black Tie in a effort to conduct a Educational Initiative as we did in November of this year at the Austin Black Tie. Once again transgender people were turned down. Once again reasons were given as to why it was more important to raise millions of dollars for HRC than to build a working consensus for a gender inclusive ENDA. ENDA will save lives immedatly. It will give Transsexual sex workers a opportunity to compete for the positions they once held. It will give street transgender people a way out from under the bridges and hiding. It will help to curtail the suicides by Transgender people who are so ashamed of their condition and that they are helpless to change that KILLING themselves seems to be the only way to end the pain.

But once again we find ourselves being denied as we were in Houston and New Orleans and all across this nation at HRC events. When you drive up you will see me. Standing on the streets. Being harassed by police and security. Standing up for justice. Stand up for Trans rights.
STAND UP FOR TRANS RIGHTS IN NOVEMBER IN DALLAS TEXAS. TELL HRC HELL NO. WE ARE AS DESERVING AS ANYONE TO BE PROTECTED BY LAW. WE WANT HRC TO PROJECT THIS MESSAGE TO CONGRESS WITH ALL MEANS AVAILABLE. TODAY.
Posted by planetransgender at 3:49 PM 2 comments: