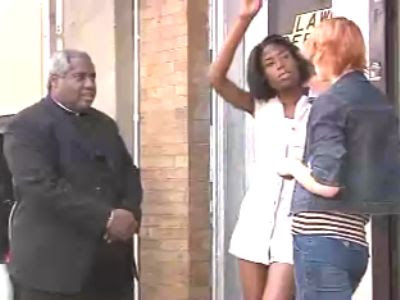 Queens Residents Speak Out Against Violence On Transgender Youth
NYC Transgender Shelter Says Director Attacked
Father Braxton in a telephone interview shortly after this incident, told me that his site was unable to accept donations because of a technical problem. I promised Reverend Braxton I would return and try to help. Here we are.
Please make a Donation to Carmens Place

NEW YORK (AP) -- A priest who runs a shelter specializing in outreach to homeless transgender youths was beaten with construction equipment and paint cans by a group of teenagers in a possible hate crime, authorities said Tuesday.

Two 17-year-olds and a 16-year-old were awaiting arraignment Tuesday on charges of assault and criminal possession of a weapon, Queens prosecutors said. A 15-year-old was being charged as a juvenile in the Monday attack outside the Carmen's Place shelter, prosecutors said.

The four boys gathered in front of Carmen's Place around 10 p.m. and started harassing and taunting the residents with homophobic slurs and insults, people at the shelter said. The director, the Rev. Louis Braxton Jr., tried to intervene but was attacked with paint cans, a woodworking tool and other objects found along the street, they said.

Braxton, 52, was treated at a hospital for cuts and bruises. A shelter resident also was injured in the attack, which occurred on one of the main thoroughfares in the Astoria neighborhood.

Braxton spoke about the attack on Tuesday.

``Unfortunately, violent attacks against transgender youth is not unusual,'' he said. ``What made this incident so disturbing is that it occurred on a congested and busy New York City street.''

The incident was being investigated by the police Hate Crimes Task Force, and charges could be upgraded if it's found a hate crime took place.

Carmen's Place first was established by a missionary named Carmen Solis in the basement of St. Andrew's Episcopal Church, where Braxton was pastor. The shelter provides beds and food for youths who have been kicked out of their homes or turned to prostitution.

When the parish closed in 2007 because of financial trouble, Braxton rented a nearby two-bedroom apartment for the shelter, which currently houses about a dozen transgender youths.

The nonprofit runs on a shoestring budget and relies on donations.

Shelter spokesman Reggie Johnson said residents there often are harassed and the attack on Braxton is the latest in a string. He said the shelter is working with community leaders and the local police precinct to help make the area safer for residents.

Four teenaged boys were arrested for attacking the director and several residents of a transgender center in Astoria Tuesday. NY1’s Ruschell Boone filed the following report.

Father Louis Braxton, Jr., who leads the transgender center "Carmen's Place" in Astoria, Queens, says he was trying to defend a group of transgender teens who were being assaulted Monday night when four teenaged boys attacked him with belts and paint cans.

“I was standing right here looking that way and they kind hit me from behind,” said Braxton, who says the incident happened in front of the shelter where he and the transgender teens live. “I have a couple of knots on my head right now and a fat lip.”

Braxton said the boys struck him after yelling anti-gay slurs at the transgender teens, who were horsing around outside the shelter.

Carmen's Place has been a safe haven for transgender and gay youth for about three years.

“When they said what they said, I was shocked,” said victim Alessandra Carver. “I was like, ‘You feel good about what you're saying?’ and then that's when he was like, ‘Why you talking?’ So he went there and took a trash can and hit me with the thing upside with one of them.”

Police say four teenagers were arrested for their role in the attack -- 17-year-old Tyreek Childs, 16-year-old Travaughn Payne, 17-year-old Shara Mozie and a minor whose name has not been released.

The teens have been charged with assault and criminal possession of a weapon. Police say they are still trying to determine whether or not they will be charged with a hate crime.

In the meantime, Braxton and the transgender teens say the attack left them feeling unsafe at their shelter, and they are now looking for a new location.

Queens Residents Speak Out Against Violence On Transgender Youth 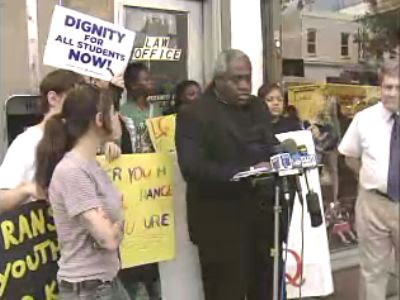 Some angry community members spoke out against violence in Astoria Thursday in response to an assault on a neighborhood priest and transgender youth earlier this week.

Police say the boys were assaulting a transgender teen in front of the Steinway Street shelter when Braxton stepped in to help.

"Unfortunately, violent attacks against transgender youth are not unusual,” said Braxton. “The thing that really upsets me is this happened here in such a nice neighborhood and such a nice community.”

“Transgender youth must walk down the street with their eyes over their shoulder because they never know what's gonna come their way,” said Daniel Dromm, co-founder of Generation Q Youth Services Program. “This type of violence is deplorable."

The attackers were arraigned Tuesday on weapons and harassment charges and are due back in court on August 13.

This appeal for justice to commit to what we know is right and to willingly accept the consequences of standing up to powerful forces of evil was the inspiration I needed when I decided to include my faith in gender advocacy.
Posted by planetransgender at 5:28 PM 1 comment: