Solomese hosts another million dollar baby inspite of the queer
Posted by planetransgender at 1:38 PM No comments:

When Joe So speaks the lemmings listen 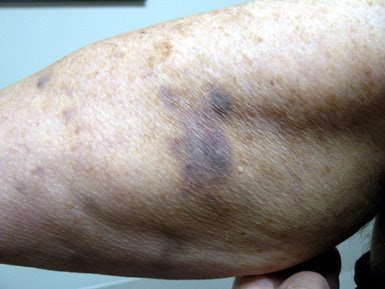 The bruises suffered by a LESBIAN woman at the hands of HRC GOONS at the S.F. Black Tie. DO YOU SUPPORT THIS?
Cross posted from Boycott HRC Blog click title for original post

Some from Joe Solmonese (HEad Dick of HRC) speech at S.F. black tie;

"Has it been without sharp disagreements about how best to move forward?" referring to the entire San Francisco GLBT community protesting, "No, as evidenced by the people protesting outside tonight."

FYI solmonese "those people" you are dismissing as "those" IS US THE QUEERS!

He went on to say;

"In any struggle for civil rights in this country, there have been occasions when different groups of people have marched down different roads. What is important to our ultimate success is that each of those roads ends at the same place"

You know this fool is really pissing me off. We QUEERS REJECT you solmonese. Yo are a charlatain and have lied and mislead us for long enough.

We have asked YOU solmonese, we have PLEADED with you Solmonese and now we are TELLING you Solmonese WE REJECT YOU AND YOUR HOMOPHOBIC AGENDA.
Posted by planetransgender at 12:31 PM 2 comments: