(West Palm Beach, FL)-- Just hours ago, sixteen young adults arrived at the DeSantis Family Chapel on the campus of Palm Beach Atlantic University. The Equality Riders were immediately restricted to the far side of the sidewalk and were greeted by an organized group of parents. During the conversations that ensued, a few students did join the group and one came out as a lesbian who is in her first year at PBAU. She was able to speak firsthand about the lack of safety for gay and lesbian students on campus, which affirms Soulforce Q's reasons for visiting the Christian school: to talk about safety and inclusion for all.

At 11:00 am EST, the sixteen Equality Riders walked to the DeSantis Family Chapel doors and were confronted by city police at the doors. School officials read a statement that barred the young adults from participating in the worship service with the students with whom they had been talking. A similar statement followed from the West Palm Beach Police Department. Inspired by the conversations that they had with students during a picnic hosted by the Equality Ride on Sunday, the Riders moved forward with good faith that they would be allowed into Chapel.

As ten of the Riders were turned away, six remained and were arrested, one by one. Those arrested were Jarrett Lucas, 22, from Philadelphia, Danielle Cooper, 19, from Maplewood, NJ, Lauren Parke, 25, from Seattle, Enzi Tanner, 24, from Minneapolis, Nicholas Rocco DeFinis, 22, from Lansdale, PA, and Zak Rittenhouse, 21, from Frankfort, OH. Students looked on as the young adults were placed in handcuffs and moved into a police van.

The remaining Equality Riders are still standing vigil and speaking with students on the corner of S. Olive Avenue and Okeechobee Road. They will remain there until 4:00 pm EST. The arrested young adults are scheduled to go before a magistrate Tuesday morning.

Today's visit to PBAU comes after a night of harassment for participants of the Equality Ride. Sunday evening, the glass door of the bus was bashed in with a hard object. Two panes of glass were shattered and small portions of the vinyl wrap were scratched off. A police report of the incident was filed.

Since 2006, the Equality Ride has visited 50 schools, hosting public forums, participating in panel discussions, and taking part in worship services and Bible studies. The goal is to inspire further conversation and to empower students, faculty, and administrators to make their school welcoming to all students. The organizers of the Equality Ride use a collaborative approach, writing to college administrators months in advance and inviting them to work together to design programming that examines diverse points of view -- including points of view that affirm gay and transgender students.

Soulforce Q is the young adult division of Soulforce, a social justice organization that works to end political and religious oppression of lesbian, gay, bisexual and transgender people through relentless nonviolent resistance. For more information, go to www.equalityride.com.
Posted by planetransgender at 7:29 PM 1 comment: Links to this post 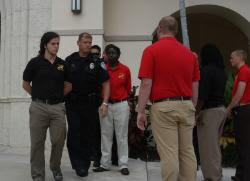 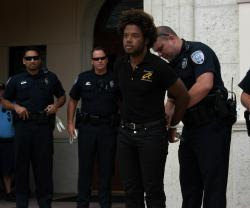 According to a article by By Scott Travis of the SunSentinel.com six Soulforce members were arrested Monday the 13th of November after attempting to enter the Atlantic Palm Beach University chapel sanctuary to attend a 11:00am service.

The SOULFORCE PRESS RELEASE of October 13, 2008 tells of the terrifying night leading up to the arrests of the Q Riders. Late at night the door of one of the buses was broken and the exterior damaged. 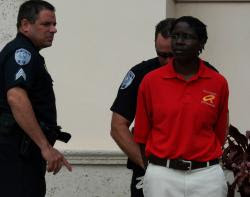 It is this writers question, what was the Q-riders offensive behaviour that predicated such a preemptive move by this University. Did the University beleive that perhaps this sexual Conduct code found in "the navigator" was in immediate danger of being violated? 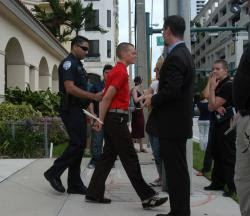 "*Sexual Misconduct
Definition:
Sexual activity that is inconsistent with biblical teaching, such as: sexual activity outside
the bonds of marriage, sexual harm*, sexual harassment and homosexual behavior"

Or perhaps the University feared the unraveling of historic and religious misconceptions and rhetoric by the realization that GLBT people experience the same irresistible love for Jesus Christ as non LGBT people and that we all are sinners and loved by Jesus the same? 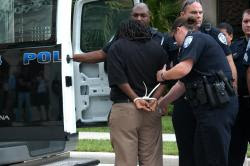