Silverton Oregon just elected lifetime resident Stu Rasmussen Oregon Mayor. Stu is a self described man who is comfortable looking and dressing as a woman.

Gender diversity rocks and Stu you are the king of Rock and Roll!


View Larger Map
Posted by planetransgender at 9:59 PM 2 comments: Links to this post 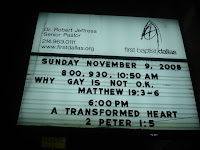 The smug, smiling members of Dallas First Baptist Church greeted the 100 angry protesters with robotic programed message "we love you". But soon this smugness was replaced with a look of horror as they learned of the reality of advertising homophobic bigotry as their own church has done.

Look what you have done

You put up a message as this and it will push a killer to believe that they you are morally justified in their killing such as gunman at the Unitarian Universalist church, the 10 year old killer of Lawrence King who walked up behind Lawrence and blew his head off, the murderer 18 year old Angie Zapata who smashed "it again" with a fire extinguisher because he saw....

There has been much gloating from "religious" figures who were instrumental in the recent Marriage Equality initiatives. The Transgender Day of Remembrance is November 20. And you love me?

DO YOU LOVE THEM?

The lady nearly in tears as I shown her my own scars. This is the reality. A gang beat me nearly to death and you good Baptists stepped over my lifeless body on the cold city street.

Do you really love me?

How about this baby?

We want you to leave us live. We have our faith, our gods, or none at all.

GOD.
Posted by planetransgender at 2:11 PM No comments: Links to this post

Some North Texans said they plan to picket a Dallas church because of a sign reading, "Why gay is not OK."

The topic of Sunday's sermon at the First Baptist Dallas Church is, "Why gay is not OK." It is written on the church's sign at the corner of Ervay and Patterson streets in the heart of downtown Dallas.

"I am surprised that in 2008, any church would have a sign like this out," Grace McFerrin said.


Dallas Transgender Advocates and Allies supports marriage equality
Posted by planetransgender at 8:34 AM 2 comments: Links to this post