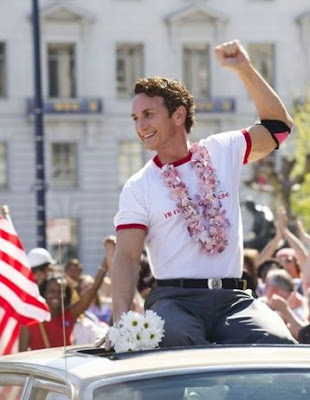 Equality Utah is pleased to announce the December 5th opening of MILK at Salt Lake Film Society’s Broadway Centre Cinemas – 111 East 300 South in Salt Lake City. MILK is based on the life of Harvey Milk.

In 1977, Harvey Milk was elected to the San Francisco Board of Supervisors, becoming the first openly gay man to be voted into major public office in America. His victory was not just a victory for gay rights; he forged coalitions across the political spectrum. From senior citizens to union workers, Harvey Milk changed the very nature of what it means to be a fighter for human rights.

Following each show this weekend and next, Equality Utah volunteers will be in the theater lobby distributing information on our Common Ground Initiative. We are inspired by Harvey Milk and his ability to connect with voters of all persuasions. We hope to follow Harvey's example with this initiative and build a broad network of support. By doing so, we will secure rights for gay and transgender Utahns.

Show times at The Broadway are as follows:

Please take the time to see this powerful movie, invite your friends and family and prepare to be inspired!

Working for a fair & just Utah,

Sign the Common Ground Initiative Petition of Support!
Posted by planetransgender at 1:19 PM No comments: Links to this post

THE GAZETTE Dec 3, 2008: UCCS Students protest physical and verbal attacks while according to a Dec. 3 Market Place article the Gay & Lesbian Fund for Colorado conragulations self across town on making Colorado a friendly state for LGBT people.

Hundreds of Gay Lesbian and Transgender students University of Colorado, Colorado Springs protested the unsafe conditions on the UCCS campus while in the same city the established Gay community was wearing a hole in there shirts patting themselves on the back for "for Making the State a more Welcoming Place for Everybody"

Concerns that gay, bisexual and transgender students at the University of Colorado at Colorado Springs have felt unsafe on campus this semester and have experienced verbal and physical harassment drew hundreds of people to a peaceful rally on campus Wednesday.

Contact the Gay & Lesbian Fund for Colorado and make sure that they are aware that our youth are in peril.