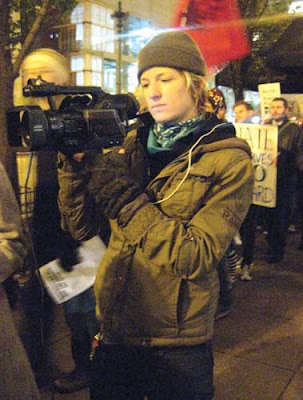 "Fish out of Water" by film maker Ky Dickens explores the current misconceptions about the bibles interpretation of homosexuality. Ky is featured in the Windy City Times December 12 2008 edition.

"Religion is a complicated topic. Add in homosexuality, and get ready for an onslaught of people saying, “You're wrong,” “That's sinful” and “We'll never see eye to eye.”

"With her new documentary, Fish Out of Water, Chicago filmmaker Ky Dickens tackles both sides with an arsenal of honesty, passion and a little yellow bird."

"Windy City Times recently caught up with Dickens to gain some insight into this ambitious process."

planetransgender story
Fish Out of Water - "Every thing you have ever heard about homosexuality and the Bible is going to be turned inside Out!"

Fish Out of Water Blog