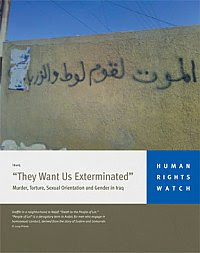 "BAGHDAD (AP) -- Militiamen are torturing and killing gay Iraqi men with impunity in a systematic campaign that has spread from Baghdad to several other cities, a prominent human rights group said in a report."

"Murders are committed with impunity, admonitory in intent, with corpses dumped in garbage or hung as warnings on the street," the 67-page report said.

"Reliable numbers weren't available, Human Rights Watch said, blaming a combination of the failure of authorities to investigate such crimes and the stigma preventing families from reporting the deaths. But it cited a well-informed U.N. official as saying in April that the death toll was probably "in the hundreds."

Posted by planetransgender at 8:11 AM