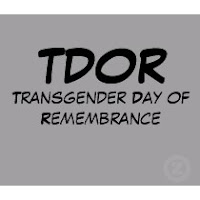 Since 1998, each November 20th is set aside to memorialize those who were murdered due to anti-transgender hatred, prejudice or ignorance. Tarrant County will commemorate the 11th annual Transgender Day of Remembrance at the Carr Chapel on November 20th beginning at 7:30 PM. The community is welcome to attend this service sponsored by Brite Divinity of TCU, Agape MCC, Trinity MCC, Sexuality Education Center and the Dallas Transgender Advocates and Allies (DTAA).

The TDOR will be an opportunity to express love and respect for all people. It will remind participants that they are all a part of the human family, daughters and sons, cisgender(non-transgender) and transgender people together. Allies of the gender diverse will stand alongside us in this ceremony to memorialize, honor and look forward to a day that differences and gender variance can be celebrated without fear of violence.

Agape MCC has many transgender people in regular attendance at their worship services including their Senior Pastor, Rev. David Wynn, a transgender male. They also host a cross-dressing men‟s group monthly. “Agape MCC has always held a strong commitment to providing sanctuary for gender diverse people,” Rev. Wynn declares. Rev. Wynn clarifies, “In many ways transphobia appears to be the „last acceptable form of prejudice‟ in the culture today, thus setting up transgender people to be victims of violence and those who are seen as expendable.” Rev. Wynn‟s goal of the service is, “To honor those who have paid the highest price for fearlessly being who they are and providing an enduring voice against transphobia. Our transgender community at Agape reflects our entire community in affirming Jesus' radical inclusion and God's unconditional love for all of creation.”

Curtis Smith, Pastoral Leader of Trinity MCC Arlington, reports that his church has been participating for the last 6 years. Smith explains, "Trinity's transgender and questioning church members are a cherished people in Christ‟s communion. We feel enlightened by the TDOR and our ongoing "Would Jesus Discriminate" campaign as to the historical reservations our Gay and Lesbians congregants previously felt towards transgender people. We feel it is important for our members to respect all people and offer them an open communion.” "Last year," Pastor Smith recalls, "Trinity MCC participated in the 2008 TDOR with Agape MCC by praying for victims as a bell was rung after each name was read of those who had died in that year to anti- transgender violence. It was a very somber and moving part of last year‟s TDOR service,” Smith said.

The Remembering Our Dead Web Project estimates that 2 people a month, on average are killed from violence against transgender people. Not that every person commemorated self-identified as transgender but each was a victim of violence based upon bias of gender variance. "Because intolerance and violence against the Transgender Community is often ignored, we remember those who have gone before us and we dedicate ourselves to life – living it responsibly, respectfully and lovingly. Life really comes down to treating others as we wish to be treated,” exclaims Dr. Rita Cotterly, PhD., Director of the Sexuality Education Center.

The Matthew Shepard/James Bryd Jr Hate Crimes Prevention Act recognizes that there is much work to be done locally as there are only 13 US states with Hate Crime Laws that include Gender Identity, Texas not being one. A provision of this law is that it authorizes and funds the federal government to step in and prosecute hate crimes in states that are disinclined to do so.

Texas has had 20 recorded transgender deaths attributed to anti-transgender violence, with 3 of those occurring in DFW, only surpassed by New York and California. Internationally there have been 95 Deaths from January to October 22, 2009 which average 19 per month. Names, statistics, locations and causes of deaths can be found on the Transgender Day of Remembrance website at www.transgenderdor.org.

Dr. Stephen V. Sprinkle, PhD., of Brite Divinity School at Texas Christian University will be in attendance. On the Unfinished Lives Project website, Dr. Sprinkle reports, ""We must remember that the recent passage and signing of the Matthew Shepard and James Byrd, Jr. Hate Crimes Prevention Act into law will not magically stop the killing. Record numbers of LGBTQ Americans, especially young transgender people of color, are dying violently all across the land. But the high water mark of hatred has been scotched with the stroke of a pen on the day President Obama kept his promise and signed the bill. The end of the beginning of full equality for my people has come. And we who believe in justice will not rest until it comes fully, so that all of us may love whom we choose without fear of violence."

Kelli Anne Busey will be in attendance. Kelli, a woman of faith, authors planetransgender.blogspot.com and is founder and co-administrator of the Dallas Transgender Advocates and Allies. Kelli says "I believe that our Transgender Day of Remembrance is a critical component of our advocacy." She elaborates, "The TDOR is emotional and spiritual because it educates and endears us with our current and potential allies as we lend a human touch to the horrific murders of transgender, gender queer, questioning, friends and lovers."

The Dallas Transgender Advocates and Allies (DTAA) are locally based non-denominational activism group with members worldwide. DTAA membership believes that the world and especially the LGBT community is a, "Place for everyone. No Exceptions." The DTAA was conceived while protesting the expulsion of transsexual entertainers from the Crews INN bar and hosted the first formal conversation with the openly gay Episcopal bishop, Bishop Gene Robinson. Since that time the DTAA has moved on to insure that the Dallas's publicly funded homeless shelter 'The Bridge' policy and training manuals were amended so that weather related deaths such as that of Austin‟s Jennifer Gale's, could not be attributable to hostile shelter conditions.

Both Agape MCC and Trinity MCC Arlington are members of the Universal Fellowship of Metropolitan Community Churches which is the world's largest and oldest Christian denomination with a primary affirming ministry to gays, lesbians, bisexuals, and transgender persons. Known as "The Human Rights Church," local MCC congregations are located in 28 countries. Both churches are currently participating with three other North Texas MCC churches in the “Would Jesus Discriminate? WhyWouldWe.org” campaign.