Source: Dec. 9 (Bloomberg) -- "Uganda will drop the death penalty and life imprisonment for gays in a refined version of an anti- gay bill expected to be ready for presentation to Parliament in two weeks, James Nsaba Buturo, the minister of ethics and integrity, said."

"The draft bill, which is under consideration by a parliamentary committee, will drop the two punishments to attract the support of religious leaders who are opposed to these penalties, Buturo said today in a phone interview from the capital, Kampala."
Full article at Bloomburg.com Uganda to Drop Death Penalty, Life in Jail for Gays (Update1)

Posted by planetransgender at 11:08 PM No comments: Links to this post

Email ThisBlogThis!Share to TwitterShare to FacebookShare to Pinterest
Labels: Uganda

Maddow questions Cohen about the discredited lies accredited to a disbarred ex gay source in his book that were used by the Ugandan government to justify it's "Kill Gay" bill. Cohen like a rat scurries backwards as he claims his third edition will have those passages extracted so "that it can't be used against gay people'.


The blood of murdered LGBT people in Uganda is on your hands Richard Cohen.
Posted by planetransgender at 9:04 PM No comments: Links to this post

In light of continuing delays in the House of Representatives, we must state clearly and unequivocally: Passing basic job protections for lesbian, gay, bisexual and transgender people must happen now. At a time when our government is deeply focused on the critical issue of employment, it is inexcusable to delay action on the Employment Non-Discrimination Act (ENDA). Each and every job lost to prejudice based on sexual orientation and gender identity needlessly compounds the unemployment challenges facing our nation. We call on Congress for the immediate passage of ENDA.

For decades now, we have called upon Congress to pass legislation to address the basic right of LGBT people to work free from discrimination at our jobs, and now Congress tells us we must wait another year. In 29 states, it remains legal to fire people based on sexual orientation and in 38 states, discrimination based on gender identity remains legal. In failing to take swift action to pass ENDA, our government allows unfettered bigotry to go unchecked, leading to the loss of jobs, fear in the workplace, economic instability, and personal hardship, while allowing employers to lose competent experienced workers. ENDA is urgently needed by our communities.

The majority of Americans consistently state their support for employment protections and voters have affirmed similar state and local measures. There is absolutely no reason for Congress to continue to delay this non-controversial bill or drop LGBT issues to the bottom of their agenda. We will not be denied basic rights any longer. Nothing is more important than protecting peoples' jobs so ENDA must pass now. Further delays are absolutely unacceptable.

Click here to send this message.
Posted by planetransgender at 8:22 PM No comments: Links to this post

A speical message from Jane Lynch

Serving on the Board of Directors of the L.A. Gay & Lesbian Center is one of the things I'm most proud of in my life. I do it because there are still far too many people—especially young people—who are harassed, abused or abandoned because of who they are. That's why I'm asking you to join me in making an urgent donation to the Gay & Lesbian Center today.

This year the demand for the Center's services for homeless LGBT youth doubled. More than 900 youth routinely depended on the Center for warm meals, a safe place to stay, clothing, counseling and much more.

Unfortunately, as the demand has increased, donations have fallen. At a time when young LGBT people need us more than ever, the Center is facing a $79,000 budget gap in private donations.Let me assure you, whatever you give will be put right to use to help young people like Theresa. This 17-year old recently told us, "If I weren't here at the Center, I would probably be in jail or dead."That's why the Gay & Lesbian Center is so important. Nothing matters more than getting young people off the streets and giving them the compassionate support they deserve. Won't you give what you can to support our efforts?

Though we've already expanded our services by adding 6 emergency beds and expanding the hours at our Jeff Griffith Youth Center, we're still struggling to . 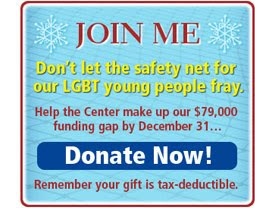 meet the increased demand from homeless LGBT youth.We're also seeing an increase in the number of people with HIV/AIDS who have lost their jobs and health insurance—and who are turning to the Center for free and low-cost medical care.That's why we need your help. We can't do this alone.

Your gift today is absolutely critical—we must close this funding gap to meet the needs of the more than 20,000 people who depend on the Center month after month. Please help us close the gap and keep our LGBT safety net strong by making a generous, tax-deductible gift today.A gift of just $35 will provide another day's worth of services for a homeless youth at our drop-in center; $75 will give a young person one night's shelter from the streets. Whatever you can give will make a vital difference, especially at this time of year.There are thousands of LGBT kids out there right now with nowhere else to turn. Please join me in giving them a safe place to turn this holiday season by making a generous gift today.
Posted by planetransgender at 4:57 PM No comments: Links to this post

I have loved this song from the first time we sung it. Now it takes on a special meaning as we join together in the "Affirmation Declaration"that all people are worthy of loveingkindness in the face of mounting opposition to our belonging in providence by the signers of the "Manhattan Declaration".

Set our hearts on fire as we sign the "Affirmation Declaration" 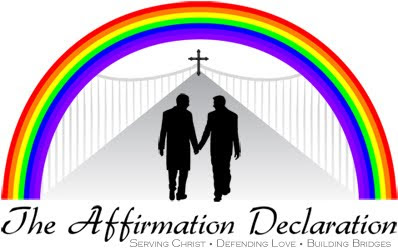 The Affirmation Declaration is a statement that expresses the convictions of Christians all over the world. It was written in response to the now famous Manhattan Declaration, to correct egregious errors contained in the document, errors that have been preached in the pulpits of many local churches for far too long.
With the growing notoriety and support for the Manhattan Declaration, our Affirmation Declaration reflects an urgent need to respond to the portion of the Manhattan Declaration dealing with issues related to sexual orientation—specifically, homosexuality and same-sex marriage. We strongly disagree with the contention that same-sex attractions and the oft-resulting romantic activities are immoral.
Because of the large number of people affected by this serious issue one way or the other, we felt it expedient to respond formally, both by submitting our Declaration to the drafters of the Manhattan Declaration, as well as by releasing our Declaration to the public, allowing Christians to show their support for love and affirmation, just as so many have shown their support for the propagation of false doctrines of oppression and inequality against the GLBTI (Gay, Lesbian, Bisexual, Transgendered, and Intersex) community.
We also desire to let the world know that not all Christians are locked in what we believe to be an ancient worldview regarding homosexuality. We want to give people hope—hope to know that God loves them just as they are; hope to know that their gay loved ones are not destined for Hell; hope to know that although some Christian churches will never accept them or their same-sex unions, a great many will.
May the signatures we garner serve as a fire that will never burn out, lighting the way through the darkness of bad theology, and setting Christ's Church back on the right track as it relates to matters of sexual and gender orientation, and gender identity.

Sign The Declaration • Spread The Fire
"A new commandment I give unto you, That ye love one another; as I have loved you, that ye also love one another. [35] By this shall all men know that ye are my disciples, if ye have love one to another."
John 13:34-35
Posted by planetransgender at 1:05 AM No comments: Links to this post