Marcela Romero is Argentina's Woman of the Year and Transgender! 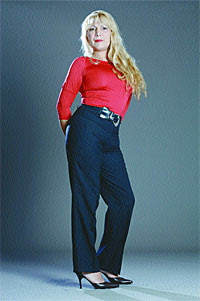 "...somos personas que venimos de una lucha fuerte, no ese estereotipo or we are people who come from a strong fight, not the stereotype." Please meet transgender activist Marcela Romero Argentina's Woman of the year!

The Dallas Voice reports that "The honor was conferred by the Committee on Women and the Family in the lower house of the Argentine Congress in recognition of Romero’s 10-year court battle to have legal documents issued recognizing her identity as a woman."

This accomplishment is astounding. Ms. Romero'a battle for life has included separating her transgender expression from the patriarchal, hetero and homo-normative misogynistic "drag Queen" genre, imprisonment and physical assault. The recognition of Ms. Romero by Argentina's goverment was not a universally appreciated event as some of the members of the government's lower house walked out during the announcement.

I wonder if any of the upset people were American conservative ultra orthodox Anglicans who recently absconded to the "Southern Cone"?

Posted by planetransgender at 10:54 AM No comments: Links to this post 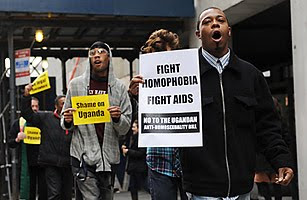 Source Time.com"The late-November afternoon sun bore down on the park in downtown Kampala, and all along the benches, Ugandan office workers took their siestas. There could have been no less likely setting for criminal conspiracies to topple an East African state. Still, the doctor's voice dropped a notch when an office worker in a brown suit settled in close by. The medic shifted a battered fedora over his eyes. "I am the gay doctor," the physician whispered to me, making sure nobody around heard. He talked about the gay and lesbian couples who go to his office to avoid ridicule in public hospitals. "They know they can trust me, and trust is a big issue," he said. "There is the stigma of being gay, but also the stigma of being [HIV] positive. They are such hidden communities. Nobody wants to deal with their problems."

"In a matter of weeks, the Ugandan doctor's admission to TIME could land him in jail and his patients on death row. An anti-homosexuality bill now before Uganda's Parliament would include some of the harshest anti-gay regulations in the world. If the bill becomes law, the doctor, who asked that his name not be published, could be prosecuted for "aiding and abetting homosexuality." In one version of the bill, his sexually active HIV-positive patients could be found guilty of practicing acts of "aggravated homosexuality," a capital crime, according to the bill"

Read more: Time.com Uganda's Anti-Gay Bill: Inspired by the U.S.
Posted by planetransgender at 10:12 AM No comments: Links to this post