Julie Bindel: The transmisogynist that Kills

Julie Bindel, a British feminist is the most heinous of transmisogynistic, transphobic woman to ever darken the pages of LGBT European culture. Bindel now wants to play the victim card having been uninvited from many of her former 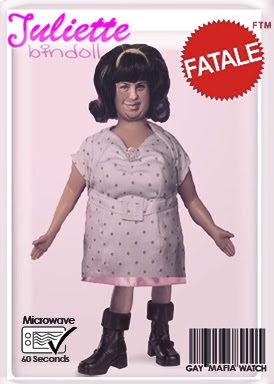 platforms because the protests of the truly victimized have finally begun to reach he ears of compassionate allies in the British LGBT community.

I have extremly liberal Gay and straight friends in Britain who make me recoil with their paternalistic comments when I post a feminist view defending the right of transgender woman to a fair and just life.

British men, it seems, feel I need their approval to be a outspoken and being a feminist transgender woman? Not acceptable. It's as if!

The differences in our cultures expectations of the treatment of transgender people is a cavernous divide, the Americans having crossed that bridge with UNITED ENDA and the British languishing with internal hemorrhaging, thanks to Julie Bindel's knife.

Julie Bindel has done the worst damage that anyone could have possibly done to transgender people and feminism as a whole. She has polarized gays and lesbians into different camps, having been nominated for a award by stonewall, the British Gay and lesbian advocacy organization.

Julie Bindel is the transmisogynist that kills.

Protest her? YES! Silence her like she has done for decades to countless helpless transgender victims? YES! Do I care if she feels like a victim for it? NO.

Silence Bindel.
Posted by planetransgender at 10:16 AM No comments: Links to this post