Garden State Equality invites You to Help DEMOLISH THE DiViDE!

Posted by planetransgender at 6:47 PM No comments: Links to this post 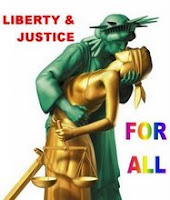 Freedom to Marry Day 2010 is still on despite possible inclement weather. The Kay and Wendy's wedding ceremony will begin at 12:00 PM on Friday at the Records Building (509 Main St). After the kiss and bouquet toss the couple with crown in tow will make it's way to the Marriage License Office to place an application.

The Dallas Voice has reported that Joey Faust and his band of Christian bigots are planning on crashing our party. At previous QL events this group of right wing extremists have been very aggressive towards LGBT demonstrators. Please join us in solidarity as we celebrate the union of Kay and Wendy Churitch.

Some 1300+ rights and benefits that accompany a civil marriage are consistently denied to Lesbian, Gay, Bisexual and Transgender (LGBT) couples. These rights include:

· Sponsorship of a spouse for immigration

LGBT families lack the same legal protection that straight families often times take for granted. The denial of access to marriage is tantamount to the denial of full citizenship. For the our personal wellbeing and that of our families and society we demand to no longer be treated as second-class citizens.

Many are correct when they say that marriage is the bedrock of society. It’s a grave injustice however that such a fundamental institution is denied to a group of citizens solely on the basis of their gender. As LGBT couples become more integrated into society our demands of equality and to be treated with respect grows louder. In order for the LGBT community to make serious advancements in our struggle for equality and liberation we must come out of the closet and in the great tradition of previous civil rights movements take our grievances as an oppressed people into the streets. As the great abolitionist Frederick Douglas said “power concedes nothing without a demand. It never did, and never will”!

President Obama took the 2008 election full of promises to the LGBT community. His tepidness and lack of leadership in standing up for minority's rights has been quite troubling.

Unfortunately, during his campaign Obama chose to cozy up to anti-gay foes such as Rick Warren while backing off marriage equality. This constitutional lawyer turned president of the United States once supported marriage equality when in the Illinois Senate. In the run up to the election Obama said to the Chicago Tribune, "I'm a Christian. And so, although I try not to have my religious beliefs dominate or determine my political views on this issue, I do believe that tradition, and my religious beliefs say that marriage is something sanctified between a man and a woman."

As a GLBT community we must demand that Obama grow a spine, separate church and state and begin using the most powerful position in the world to advocate for Gay, Lesbian, Bi-sexual and Transgender equality and liberation. We can, and must, do better for ourselves. Like any oppressed group, however, the onus to liberate ourselves lies solely on us. Organize, agitate and demand a brighter future for yourself and your Queer family!
Posted by planetransgender at 6:33 PM No comments: Links to this post