Posted on Bilerico by Dr. Jillian T. Weiss The long-stalled Employment Non-Discrimination Act (ENDA) is going to roll out shortly. Exactly when, and with what changes are uncertain. But it's coming, and Representative Frank has promised a vote by the end of March. If you value the need for job protections as I do, we must be prepared to lobby -- hard, fast and furious.

On Tuesday, March 16, there will be a lobby day specifically for ENDA in Washington, D.C.. LGBT people and allies from around the country who support ENDA will be there. I will be there. Will you?

It is particularly important to ENDA that people attend from the eight states in which Senators are on the fence. If you live in one of these states, you hold the fate of ENDA in your hands.

This is too important to be limited to only middle or upper class people who can afford a ticket. If you are from one of these eight states, and you are a currently-unemployed LGBT person who is unemployed because of job discrimination based on sexual orientation or gender identity, I would like to help you get there. Read on at Bilerico and how you can get to Washington DC 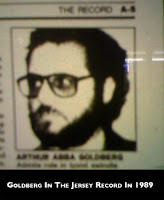 According to the South Florida Gay News after being exposed for his past and present predatory practices Goldman became defensive claiming he is being attacked unfairly as he is only the ex gay messenger.

Goldman's dangerous present day con serves as a illegitimate source of income for self serving people who have no true concern for the welfare of others. Unfortunately ex gay organizations also provide a platform for various pseudo religious and right wing organizations that need to legitimize their crusades against the human rights movement in America.

"The potential risks of reparative therapy are great, including depression, anxiety and self-destructive behavior, since therapist alignment with societal prejudices against homosexuality may reinforce self-hatred already experienced by the patient. Many patients who have undergone reparative therapy relate that they were inaccurately told that homosexuals are lonely, unhappy individuals who never achieve acceptance or satisfaction.