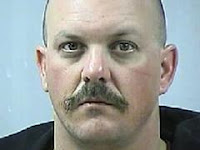 Up Dated Feb.27 Confusion abounds in reports of the gender identity of the alleged victim Did cop rape a Trans Man or Trans Woman?

Feb.26 woaitv San Antonio -- "A San Antonio Police officer was arrested and is accused of sexually assaulting a transgender man.

The man claims officer Craig Nash [pictured left] picked him just south of Downtown early Thursday morning, handcuffed him, and told him to lay down in the back seat of a patrol car. He told investigators Nash then drove to a nearby location, un-handcuffed him, and sexually assaulted him.

The alleged victim said after the assault, Nash dropped him off at a nearby school. He then took a bus to a police station to report the assault. According to an arrest warrant affidavit obtained by News 4 WOAI, the alleged victim told officers Nash "wasn't going to get away with this"

Police arrested Nash after the alleged victim identified him in a photo line-up, and police linked his patrol car to the alleged scene using a GPS tracking system.

Nash has been charged with sexual assault and official oppression. He has been with the San Antonio Police Department for 6 and a half years."