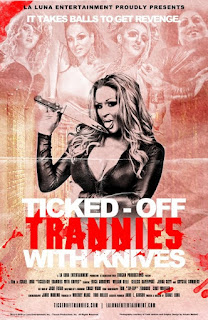 DEMAND that they not show 'Ticked-Off Trannys With Knives' at the Tribeca Film Festival.

From the facebook group Boycott Ticked off Trannys with Knifes" Recently the Tribeca Film Festival has announced that it will be screening the movie "Ticked-Off Trannies With Knives" directed by Isreal Luna. Billed as comedy/thriller/‘transploitation’.

Humour can be used to challenge and subvert, but this movie fails on both counts. In a society where trans people struggle to be accepted and have their lives viewed as equally valuable, this film does them no service at all. Instead, it perpetuates negative and harmful stereotypes.

Crucially, the movie fails to be funny because of the social context within which trans people live: transphobia is systemic, trans people experience disproportionate levels of violence and discrimination, and each year hundreds are murdered just for being trans. Portraying trans women as murderous vigilantes hunting down their abusers is hardly going to improve understanding about this heavily marginalized group of people.Those of us who are trans, or who love and respect trans people, won't let this movie go unchallenged.

For more information about the movie you can check the links section and read this blog post on Skip the Makeup: skipthemakeup.blogspot"