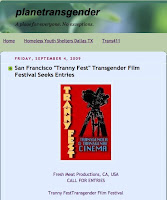 Dallas voice attacks me. Again. At least this time they had the guts to call me out by name.

I stand accused by the Dallas Voice author Arnold Wayne Jones of promoting the San Francisco event called 'tranny Fest' while simultaneously protesting the movie 'ticked off trannies with Knives'. Presumably the offence is having a double standard because both events contain the word 'Tranny' in the title.

Yes I did publish that story about 'TrannyFest' I was asked to do so by a transgender person living in San Francisco who deeply wanted the this event to succeed.

In San Francisco it seems unlike most of the rest of the county, the word "Tranny" is more accepted by transgender people. It is used often casually within the transgender community while addressing each other with dignity and respect.

Within the transgender community we occasionally use the word tranny to show affection in the same way some of my black friend call each other "Nigger".

Like the 'T' word, the 'N' word often makes me uncomfortable and I tell my friends so. None the less I have been called the 'N' and 'T' word on occasion by my friends and when they do, my chest pumps up with pride, because they are acknowledging me as an equal and as a confidant. I am proud to be considered their equals because in my heart I know I can only admire many of there qualities and aspire to emulate them.

The Dallas Voice published a story here once again attempting to drag me to their pitiful depths all because I had once again asked to be interviewed so I might present a local transgender persons side of this issue. This has never been allowed by the Dallas Voice. And when I accused John Write the "News" editor of misogyny because he positioned a wonderful considerate and well written synopsis by transsexual advocate Ashley Love's on the movie TP*WK" as "Scathing'.

Reading that, Wright in a redux of 2009, puffed himself up and warned me "Do you know who I am?" Yes john you are a misogynistic pig and only a coward would encourage others to hurt people and then attempt to obscure themselves behind their Blogs coat tails. When I questioned him about this article he replies 'it's the blog and I don't feel anything ether way about it.' You are a low life coward John Wright.

I have to come clean. I'm ashamed to admit but I called John Wright's blog author a faggot at that point. Well you are what you are. I will be confessing this to my pastor tonight.

No john wright Ms. Love's dissertation about TO*WK was not scathing. It is a centralist and moderate response to gay peoples efforts to dehumanize and marginalize us.

The word controversy began in 2009 because the Dallas Voice used the word 'Tranny' repeatedly and intentionally in a defamatory manner.

The first paragraph in my first article explained my position when I asked them to treat transgender people with respect.

I wrote: "I hope everyone who watches[reads] this comes to appreciates how harmful it is to the self respect of transgender people when you call us "Trannie" and unless we are a entertainer with published articles which we identify ourselves individually as a "Drag Queen or Tranny" please do not call us by these names."

The promoters of "TrannyFest" identified themselves as 'trannies' a word I still find to be derogatory mainly because of gay people who love to sling it around in a demeaning and insulting fashion.

I do not live in the vindictive hateful depths that these people seem to so thrive in. I will not revert to using slurs
Posted by planetransgender at 3:55 PM No comments: Links to this post