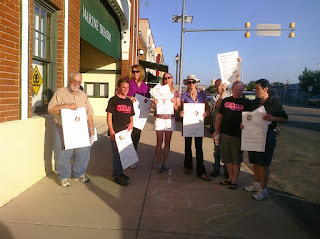 Today, we transgender advocates and allies, sisters and brothers gathered together at Q Cinema in Fort Worth. It was HOT but our message was even hotter. We were there protest and Educate about "Ticked Off Tra**nies With Knives"

We needed to help the patrons of Q Cinema to understand how damaging this movie is to the transgender community and instill in them a intimate experience in 30 seconds of being in close emotional contact with a transgender person.

We wanted to make this experience real and for the moments before they entered the building one that they would always remember as the most powerful, meaningful moment when asked by anyone, well how was it? (comments heard often from patrons "They said there would be awful protesters outside but you people are so nice")

Many were so unbelievable sensitive and receptive to our concerns when after the protest, the police commented to me on how peaceful the protesters were I told her "It was peaceful thanks to the patrons, they were so nice."

This held true for most, save the few transgender woman that entered the building. I was abused by some with divisive name calling and even one telling me to "SHUT UP"!

That energized me like a thousand volt shock sending me parading again down the side walk laughing because every protest I have ever participated I was never told to "SHUT UP". Well ladies I didn't and will not acquiescent to your demand.

Future protesters of TO$WK. Contact your local police department and ask them to define the laws that govern public gatherings.

In Fort Worth Texas you do not need a permit and you are within your rights to protest as long as you stay on public property and do not impede the public or block entrances or exists to buildings. Vital to know!

When we arrived in front of the building a Q Cinema attendant officially tried to tell us where we could protest at, which was a building down from the front of there building.

After he finished, I looked him in the eye and told him "Thanks for your input but we will be protesting directly anywhere we want to as long as we do not violate any laws mentioned above. He became extremly agitated and told us he was going to call the police.

Imagine his response when he saw me drawing ghost outlines with chalk on the sidewalks! He was livid and told me to stop, that I was defacing public property, was going to get arrested, well I kept on drawing.

The police just looked on and the little man scurried back inside his building.

After the protest and Q Cinema was only able to fill 3/4 of their seats a theater representative invited everyone to see the movie FREE OF CHARGE! I was not present at for that invitation probably by design because it was made in a attempt to subvert and humiliate should everyone accept.

NOT ONE SOUL ACCEPTED. They told him if it comes on TV I still would not watch this horrendous movie.

We owned the day. The message is ours. The protest was a fantastic success.

We will be back Sunday,
Posted by planetransgender at 11:25 PM 4 comments: Links to this post

Friday Jimmy Fowler of the Fort Worth Weekly fwweekly.com published this article. Below it is my response.

“Humor can be used to challenge and subvert, but this movie fails on both counts. In a society where trans people struggle to be accepted and have their lives viewed as equally valuable, this film does them no service at all. Instead, it perpetuates harmful and negative stereotypes.”

"I haven’t seen Ticked-Off, though I’m a fan of the lurid and the ironic if they’re done well. But just as Q has every right to screen the movie, so do Advocates and Allies have the right to express their concerns with (peaceful) protests. That’s what keeps free expression alive and healthy in America."

You are the only journalist in North Texas to this point, with enough integrity to report fairly on transgender concerns which otherwise would remain unheard because of conflicts of interests with the Dallas Voice's gay readership and sponsors. Thank you!

The Dallas Transgender Advocates are protesting at the Q Cinema presentation of "Ticked Off Tra**nies with knives, but the Sundays protest time has been changed to 2:30pm.

Please blur out at least a couple of letters in the word "Tra**ies" in the future. That is a concession we have won from Luna and many in our community are asking everyone, including myself to adhere to that standard in the future.

It is unfair to categorize the Transgender Advocates and Allies as "ticked off'.

The DTAA is comprised of an incrediably diverse group representing nearly every continent on earth. Many of our members are people of different faiths who do not allow anger to be the guide post to advocacy.

We are not seeking to infringe on anyone's right to freedom of speech.

We will be seeking to educate Q Cinema patrons who are predominantly gay, about the damaging effect that this movie has on transgender people.

There is a misconception among the Gay community. Many feel that because the the inclusion of the T in the acronym LGB gay people have a innate knowledge of and the authority to speak on behalf of the transgender community.

That is simply not true and this misconception manifested itself most recently in this gay film makers mistaken beleive that this movie would actually 'empower' transgender people.

Does TO$WK enable trans people? Nothing could be further from the truth or reality.

The truth is transgender people have been murdered at a rate of over 2 people week for a total of 160 deaths, just for our gender expression, since Luna first introduced in January of 2009 TO$WK under a firestorm of condemnation from the worlds transgender community.

The truth is that the murdered transgender woman that Luna originally used as a advertising ploy in the trailer, Angie Zapata's mother Maria, recently spoke out in horror after learning Israel Luna had used her daughters legacy to promote TO$WK.

The truth is there are thousands more mothers of murdered transgender people who will be enraged after they learn Israel Luna has invoked the memories of there dear departed to sell this horrendous movie.

In fact TO$WK only serves to empower Luna's and his film crew's financial well being.

TO$WK sensationalizes in gratuitous grotesquely sexually suggestive images that the act of murdering transgender woman is the ultimate thrill, thereby enabling those who harbor hatred towards transgender people to act on those impulses which will result in even more transgender woman and men being memorialized and grieved over at the next Transgender Day of Remembrance.

This, my dear Jimmy, is why people of conscious from the Metropolitan Community Church's of north Texas will be standing with there transgender congregants in protest.

This why many gay and straight people who are not religiously active will be standing with us.

I do pray for our gay communities enlightenment that they will cease enabling the murderous behaviour TO$WK portrays by not attending TO$WK.

I do pray that Israel Luna's conscious will demand of him to place the concerns for transgender lives over this shameful grab for fame and wealth and that he removes this movie from distribution.

I hope you will be reporting at our protest Jimmy,