Demand Accountability for Neda Agha-Soltan and Respect for Angie Zapata 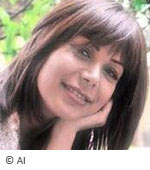 Neda Agha-Soltan, aged 27, was shot to death on 20 June 2009 during a peaceful demonstration in Tehran, protesting the results of the 12 June 2009 presidential elections. She was apparently shot by a Basij (paramilitary) sniper. The video of her last minutes, as Dr. Arash Hejazi and other bystanders tried to save her while blood poured over her face, galvanized people around the world. Although the one-year anniversary of her death is approaching, the Iranian government has as yet not carried out an investigation into her death, or the dozens of other killings of peaceful post-election protesters. The following link takes you to Amnesty Internationals campaign demanding accountability for Neda.

No Iranian exploitation comedies have been made using Neda's legacy in a cheap advertising ploy.

gender expression and a American gay man used her legacy and the thousands of murdered transgender woman in a cheap advertising ploy.

Both murderers thought that by killing woman they could snuff out the same candle of hope and faith that we share. Both murderers had this in common, they were so very wrong!

The world united to condemn both these horrendous crimes, so why should Angie Zapata or any other of the thousands of murdered transwoman be of such less value that a American gay man felt entitled to use her name to advertise a comedy about murdering transgender woman, much to the much to the horror of her mother?

Because film director Israel Luna is a misogynist who would use his ability to kill the will of all transgender woman if able. Being a gay misogynist, Luna would not pick on Iranian cisgender woman to use in this fashion. But like the two murdering cowards the preceded him, Luna is finding universal condemnation.

Israel Luna picked on transgender womankind, often made fun of in drag by gay men because of all of woman we remain the least protected and most vulnerable.

Posted by planetransgender at 11:50 AM No comments: