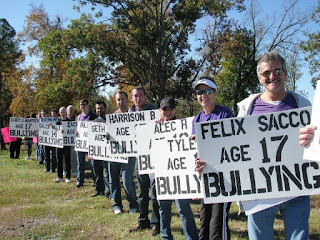 Little Rock AR Center For Artistic Revolution (CAR) "After a few days of intense organizing working to secure Mr. McCance’s resignation, CAR went to Pleasant Plain, Arkansas. Our purpose was to put more pressure on the school board and Mr. McCance to ensure that he resigned. We conducted a vigil at the Midland High School commemorating the lives of the 11 teenagers who took their lives in September as well as all those who have killed themselves because of being tormented by remarks much the same as those of Mr. McCance."

"Cooper asked exactly what are you appoligizing for?" McCance "It was over the top"

Cooper "Do you understand the pain you have caused with those words to bullied gay children if there is any in your school district and to those who aren't gay but are bullied anyways?" MaCance "Well that's a big what if"

"If" meaning he doesn't seriously beleive there are really and gay children in Pleseant Plains. That response is worthy of Iran's Ahmadinejad who also believes there are no gay people in his care.

He said he would resign (submit a letter in 3 to 7 days) from the school board to spare the district the bad press and distractions of dealing with the fallout from his comments.

As of Friday there has been no letter of resignation received according to the Arkasas Times blog.

CAR's Facebook's response? "...if he reneges we will go back until he does!"

So will we.
Posted by planetransgender at 7:02 PM No comments: Links to this post

Hollywood Transgender Attackers Caught on Video Have you seen this man? 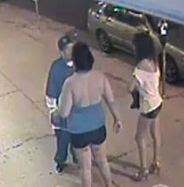 Scene outside the bar before the beating.


October 3rd these five people were taped running out of the Plaza a latino drag bar after a "transgender woman dressed as a man", probably a drag performer.

He was seen leaving the scene in a white late model suburban.

La Blog
Posted by planetransgender at 8:49 AM No comments: Links to this post