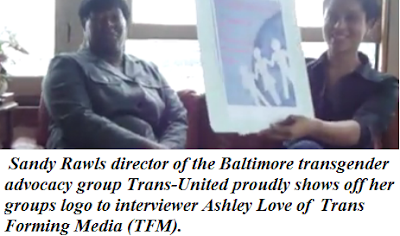 "Equality Maryland can't just keep on with what they've been doing, they have to reach out to the transgender community." says Sandy Rawls.

Sadly Equality Maryland the proponent of HB235 is not reaching out. Conversely they are continuing to censor the transgender community by not allowing the majority of people who voice dissenting opinions from commenting on their facebook page all the while trumpeting a fully inclusive meme .

Sandy Rawls and Ashely Love are the people Equality Maryland Should be listening to not their transgender doctor and another wealthy member who stated the only way their lives could have been effected by the omission of public accommodations was the possibly they might have a harder time reserving a room at the ski lodges.
Posted by planetransgender at 8:22 PM