Jewish, Muslim, Buddhists, atheists, liberals, and LGBT people, the AFA says YOU are NOT invited to pray with Texas Governor Rick Perry! 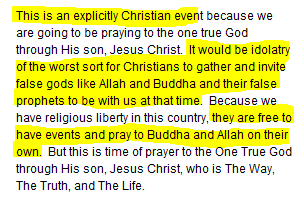 This is a clip from an AFA email explicitly disinviting all non Christians from the religious and political process. And don't presume to be a part of the prayer process that according to Rick Perry in the following video is a integral component of the political process.

The AFA would have you believe by prayer on August 6th you can identify exactly who is to at fault for our country's problems. And non Christian are not invited by Rick Perry to join in finding out whom to blame for this perceived imminent demise of our country. This same sort of exclusive fear mongering, a threat of the "END DAYS" was also used to motivate people to convince Pontius Pilate to crucify Jesus.

Many, like myself believe Christ's message was one of inclusivity and a eternal invitation to salvation. There is no prerequisite to 'belong' to any religion or political party to join with humanity in faith.

This is why the AFA has been designated a hate group by the Southern Poverty Law Center.

The American Family association believes all non Christians are guilty of idolatry which is a pejorative term for the worship of an idol, a physical object such as a cult image, as a god. Rick Perry by inviting the AFA to host this event is promoting that philosophy and inviting you to transform American into a theocracy .

Contrary to what Rick Perry and the AFA would have you believe, YOU are welcomed, loved and as important to the political process as any anyone else is, including hate groups.

You can help voice that belief by being among our numbers outside of Reliant Stadium protesting on August 6th 2011.

For gender diverse people atheist or of any belief the AFA has a especially toxic message. You are invited to protest with the Dallas Transgender Advocates and Allies .
Posted by planetransgender at 9:16 AM