Maryland Transgender community has become accustomed to staring at this bulldozer the past few months, as the riders grew in numbers so did our diminutive stature become more evident.

We are the poor. The disadvantaged. The blacks. The Italians. The Irish. The Jewish. The Hispanic. The transgender people from the city. In despair we began to doubt that we could ever stop HRC's funded federation member equality Maryland as they ran us over again and again.

But at the last minute a saviour appeared as if god sent. Bloodied but not beaten we 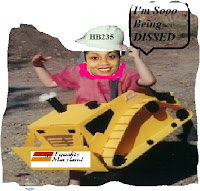 stare in amazement! A politician has stood up to the machinery of gay.com and announced our existence! Finally someone with power who would record our calls, our emails our pleas for help.

After these months of being afraid if we called your office again you would return our calls to SCREAM and THREATEN us again Del. Pena-Melnyk the shoe is on the other foot ain't it? Yeah.

I WAITED A WHOLE HOUR FOR SENATOR FROSH!!Boooooooooo
Posted by planetransgender at 9:37 AM 4 comments: