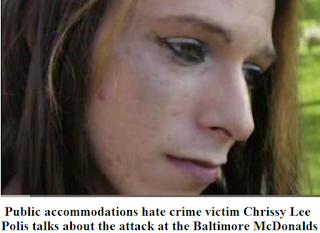 Videos dating back to 2006 document the rampant transphobia of McDonald's management that has resulted in the near death beating of this transgender woman.

*Breaking* According to Justin Fenton Crime reporter for The Baltimore Sun the police have just identified one of the suspects as 18yo Teonna Monae Brown and charged her with assault. Brown is one of the teens who accosted Polis saying she was a "man" using the women's restroom. He's not sure why police are just now releasing her name as she was arrested Friday.

The Empowered Kitty tells of her cries for mercy "Where am I supposed to go?" These were the plaintive cry of a transwoman in between savage beatings as two teen girls in Baltimore respond to her mere presence with extreme violence. It seems this individual, who is clearly presenting as female, regardless of her personal identity or legal sex, attempted to use the bathroom deemed socially appropriate for her at the time.”

This is not the first time that a Maryland McDonald has displayed intense transphobia as documented by the next three You Tube videos. The transphobic behaviour of their employees has without a doubt influenced those who assaulted Chrissy Lee Polis.

Uploaded on Jan 27, 2011 a transgender woman in a Maryland McDonald's was denied access to public accommodations by a man she said represented the restaurant as a security guard.

Translation: In the restaurant, this man was claiming﻿ to be the security of the facility would not let me﻿ in the ladies' room when obviously I'm presenting as a woman and I am in the process of transition. Because he won't let me use the bathroom, I had to step above his authority and involve the store manager.

On July 10, 2009, 17-year-old Zikerria Bellamy applied online for a job at McDonald's. On July 28, after one of McDonald's managers learned that Zikerria is transgender, he left her this message about her job application. "We do not hire faggots"

In 2006 Christina Sforza was beaten senseless by a New York city McDonald's manager with a STEEL PIPE for using the restroom! Unbelievably the police arrested this transgender woman but according to Amnesty International press release latter dropped the charges. However according to a follow up Amnesty.UK press release no police investigation or actions were taken against the McDonald's manager or the corporate office!

I received these two twitter responses from Corporate McDonald. To there credit they did reply to me but I feel their response to transphobia in there workplace will be equal to our protest. Sandy Rawls of Trans-United said there will be at least 100 people at the Monday protest at the Baltimore McDonald's.

ENOUGH IS ENOUGH! Stop the hate. I encourage all transgender folk and our allies to attend.

You can donate to her via a paypal account set up by a friend I will personal vouch for at Transowned.biz