Maryland's AG can't prosecute the McDonald beating as a transgender Hate Crime because of the legislative efforts of EQMD, NCTE, NGLTF, ACLU of MD, and HRC's sponsorship, tacit or direct, of HB 235.

Least we forget that all that all these organizations participated in the silencing of the victim of the Maryland Beating, a transgender resident of Maryland! Equality Maryland (EQMD), National Gay Lesbian Task Force (NGLTF) and the National Center for Transgender Equality (NCTC), guilty.

These organizations are now grandstanding trying to milk this tragedy claiming they fought to legislate transgender equality this spring. What they are NOT saying is they used every means at there disposal to deceive, hide, mislead, censor, alienate and finally ignore the Maryland transgender community while pushing a bill on them that they didn't want.

This cost Ms.Polis very dearly. Its time for the lies to stop. It's time for equality Maryland to lift it's censorship of it facebook page. It's time for gay.com to respect transgender people's wishes.
Posted by planetransgender at 6:02 PM 4 comments: Links to this post

The bad news. Tommy Williams Senate bill can only be described as a unmitigated attack on law abiding transgender citizens of Texas. This legislation may still be passed that would strip Texas families of there state recognized marriage. 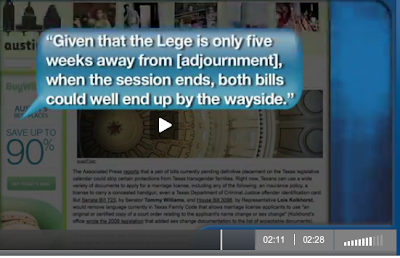 The good news: Daniel Williams at Legislative Queery reports 2/3's of the Senate does not support this bill so it has been moved to the back burner where it could very well die.

But Daniel warns us not to let our guards down, very sage advice from the veteran advocate without LGBT borders. So lets keep up the pressure. Find your legislator Here and tell them vote NO to SB 723!

NY Press
Posted by planetransgender at 7:13 AM No comments: Links to this post