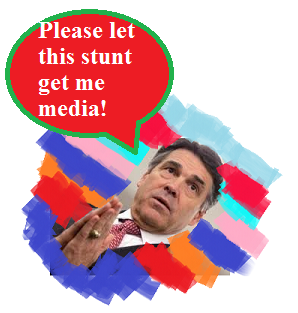 Texas Governor presidential wannabe Rick Perry's latest hate trick has been met with a firestorm of condemnation coalescing advocates from a wide social spectrum. Perry's August "apolitical prayer meeting" at Houston's Reliant Stadium which is to be paid for by the American Family Association at his invitation, a group that the Southern Poverty Law Center has condemned as a hate group. Perry has invited all 49 other Governors to the August event but as of this post only Sam Brownback of KS has accepted. The Texas Freedom Network strongly condemns Rick Perry for Using Faith as a Political Weapon.

Wanna protest the scourge of religious demagogues being invited into politics by this tea party wannabe? The Facebook event asks only those who are going to be there click attending the "Protest of Rick Perry's Prayer Event" The event has carpooling pages for everyone in Texas to help us get there. Secular America has a editable email form for everyone outside Texas to ask there state governors not accept Perry's invitation . Contact Reliant Stadium . Tell them to stand by there commitment not to host events that are harmful to the community. I'll see you there.
Posted by planetransgender at 7:47 AM No comments: