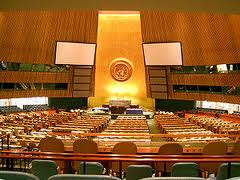 Today, on Friday June 17, 2011 the United Nations voted 23 in favour 19 against and abstentions to adopt its first ever human rights Resolution including gender diversity and sexual orientation.

Recalling also that the Universal Declaration of Human Rights affirms that all human beings are born free and equal in dignity and rights and that everyone is entitled to all the rights and freedoms set forth in that Declaration, without distinction of any kind, such as race, colour, sex, language, religion, political or other opinion, national or social origin, property, birth, or other status;

Recalling further GA resolution 60/251, which states that the Human Rights Council shall be responsible for promoting universal respect for the protection of all human rights and fundamental freedoms for all, without distinction of any kind and in fair and equal manner;

Expressing grave concern at acts of violence and discrimination, in all regions of the world, committed against individuals because of their sexual orientation and gender identity.

1. Requests the High Commissioner for Human Rights to commission a study to be finalised by December 2011, to document discriminatory laws and practices and acts of violence against individuals based on their sexual orientation and gender identity, in all regions of the world, and how international human rights law can be used to end violence and related human rights violations based on sexual orientation and gender identity;

2. Decides to convene a panel discussion during the 19th session of the Human Rights Council, informed by the facts contained in the study commissioned by High Commissioner and to have constructive, informed and transparent dialogue on the issue of discriminatory laws and practices and acts of violence against individuals based on their sexual orientation and gender identity;

3. Decides also that the panel will also discuss the appropriate follow‐up to the
recommendations of the study commissioned by the High Commissioner;

4. Decides to remain seized with this priority issue.

Absent: Kyrgyzstan, Libya (suspended)
Posted by planetransgender at 7:07 AM No comments: Links to this post