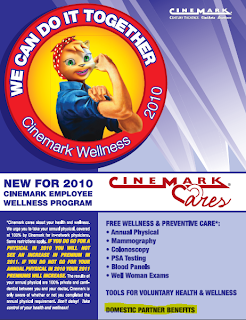 And it's what I got for falling in love with our Lesbian, Gay and straight allies too. InLaws & OutLaws.

This showing is a WIN-WIN for the north Texas LGBT community. For us it's more than the movie its a new day. We have come to learn from CineMark Vice President Bob Shimmin CineMark is now offering same sex benefits for their employees and is including gender identity and sexual orientation in it's non discrimination policies.

From Mr. Shimmin: "I hope to answer some of the questions you have about Cinemark. First, Cinemark began offering domestic partner benefits nationally on Jan 1, 2010....I have included the cover page of the 2010 Benefits Packet that was distributed to all employees in the fall of 2009 which clearly highlights the fact that domestic partner benefits were added for 2010."

I would personally like to thank Mr. Bob Shimmin for his part in helping overcome the controversies that so embroiled his company and embrace a inclusive workplace.

Inlaws & Outlaws on Wednesday, August 24th, at 6:30 pm at the Cinemark West Plano in Plano, Texas

Posted by planetransgender at 8:23 AM No comments: