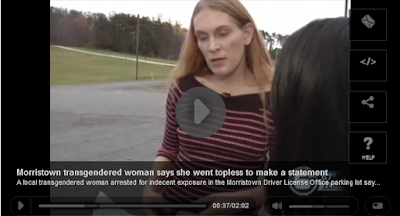 A Tennessee transgender woman who went topless in protest of the DMV's refusal to change her gender marker to female has spent 23 days in jail. Andrea Jones, who's driver license identifies her as male was arrested for indecent exposure which according to Tenn. Code Ann. § 39-13-511. Public indecency is

"The Law *can* and does have it both ways. So far, she's spent 23 days in jail for an offence that has a sentence of 2 days. She will probably be found guilty, and put on a sex offender's register as a male, for exposing herself as a female. Logic has nothing to do with it, the idea is to express society's disapproval of those born with medical conditions that make others feel uncomfortable. The persecution is quite deliberate, a matter of policy. // Just look at some of the comments here. // Being in jail, and likely to be so for a while, of course she's lost her job. Regardless of the verdict, she's unlikely to ever get another one. If put on a sex offender's list, forget it - for she's no longer just a Freak, but a sex criminal, a danger to society and a threat to children etc.// This is how Intersex and Trans people are treated in TN, this is not an "isolated case"."

Indeed Zoe, Tennessee citizenry, police and politicians have a history of transphobic and homophobic behaviour, but recently there have been some inspiring local incidents when these same people have stood up for whats right. So the fight for equality goes on and Andrea Jones is asking for help and asks you to email her at berdache1979@ya
Posted by planetransgender at 4:16 PM 1 comment: Links to this post

Transgender activist author Jordan Gwendolyn thinks "its time for a little bit of South Philly straight talk, and this South Philly girl with Jersey provenance is ready to go Jersey on the sellouts".


Cross posted with from amplifyyourvoice.org

"Just when I thought the defeat of HB235 in Maryland sent a message that gender identity should be put on equal footing with race, religion, sexual orientation, etc. Massachusetts, AT THE LAST MINUTE, decides to put a non-discrimination bill up for a vote."

"From The Massachusetts Transgender Political Coalition:"

Over the next 24 hours, it is critical that lawmakers hear from bill supporters!

In the days ahead, you may hear confusing things about this bill. To be clear, this bill provides vital protections in employment, education, housing, credit, and hate crimes which transgender residents of the Commonwealth desperately need. The bill is not perfect as it does not include public accommodations protections, but it is a solid civil rights bill that represents an historic step forward in supporting full civil rights protections for the transgender community.

Gwendolyn continues: "I oppose this bill 1000%. All I want is for every type of discrimination to be illegal, based on gender identity, and for the protections to be coequal, NOTHING MORE, NOTHING LESS. I think its time for a little bit of South Philly straight talk, and this South Philly girl with Jersey provenance is ready to go Jersey on the sellouts:" Read why shes so pissed at amplifyyourvoice.org.

Then ask yourself as Monica Roberts has on TransGriot why are "Unjust Trans Rights Bill Advancing In Massachusetts?" Even Queerty is wondering just Why Doesn’t MA’s Trans Rights Bill Protect Trans People From Public Discrimination?

My take on it? A transgender civil rights bill without public accommodations protections doesn't even give us a pot to piss in. Its only worth is the sensationalistic promotional value garnered from its promoter and chief gay.com shill Gunner Scott with whom I have a long history with after I exposed his receiving $25,000 from HRC smack dab in the middle of the HR2015 ENDA crisis.

Like I said then, You don't get money for nothing.

Oh yeah and transphobes and haters because they know a stand alone bill without gay.com's backing for public accommodations doesn't stand a chance of a ice cube in hell.

And of course gay.com who will be thrilled to get the potty problem off their backs now to be considered strictly a 'transgender issue'.
Posted by planetransgender at 6:59 AM No comments: Links to this post

Working Together with Police to Protect and PROMOTE our Transgender Community 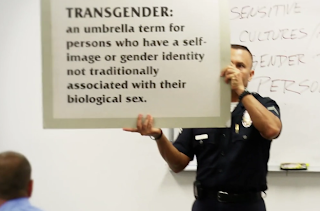 Many times crimes against transgender people go unreported. Many times out of ignorance, transgender people are misrepresented and misgendered in police reports only to be amplified by media. With the TDOR at our doorstep this is an amazing video to watch. Please clic-the-pic or link.