AP Report: It Made Me Feel Like I was of Worth: Transgender Workplace Discrimination 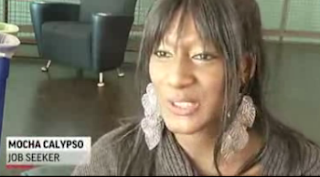 "It makes me feel like I am of worth, like I have a chance to get a job." These are the words of one black transgender woman describing how it felt to be at the LTBG job fair. But that chance for Mocha remains slim as nearly half of us, according to the the AP report, experience "some sort of workplace discrimination." I'm pretty sure that number is much higher, especially for trans people of color.

Most of us have experienced long periods of under and unemployment. When we do find jobs that actually supply a pay check we are targeted by co workers with schemes to hurt our reputations and feelings and supervisors who overlook us when training becomes available.

For the record, the narrator incorrectly described gender as an 'orientation' conflating transgender peoples gender expression and identity with sexual orientation.
Posted by planetransgender at 4:05 AM

I went to one of those LGBT job fairs in desperation after legally transitioning. I was hoping beyond hope I might make a connection who could help me.
Whenever I asked the representatives if they had job openings they said no and tried to hand me some literature.
I spent the last few dollars I had to drive there and I got nothing in return. It was a miserable feeling when I laid back down amid the clutter of my friends storage room on that airbed that night.
Then out of the blue I got a call for a interview, 2 years latter for a part Minimum wage time job.
The point is I am now working 7 days a week because all of my employers love my production.
I have my own apartment. I have hope.
I am of value. I am. And so are you.