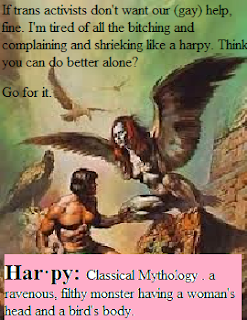 Tranny. Faggot, are words that harm equally those they are meant to offend. Not using them is a simple request that's generally respected with a few exceptions.

However, many high profile gay people feel its their right to defame transgender people and have long done so despite our requests, then demands and most recently glittering.

And as absurd as it is many Gay people are offended that we take exception to this defamation. Lord forbid we should post stories about actions taken against gay icons highlighting our angst over being defamed.


A gay man, Steven Publicover commented that I should stop shrieking like a 'harpy' on my facebook profile when I posted about the recent glittering of Dan Savage and other transgender responses to gay misogyny.

"If trans activists don't want our help, fine. I'm tired of all the bitching and complaining and shrieking like a harpy. Think you can do better alone? Go for it.

Having never heard the term "harpy" before I looked it up thinking it was a slur against Jewish people but as it turns out its Gay misogyny personified in the dehumanization of the sacred female as a "filthy beast" who is a "a scolding, nagging, bad-tempered woman".

If their ever was a insult this is it so I will turn that around. I feel a personal attachment to this transformed woman fighting her for life with only her wings of feathers to defend herself against this man's gay blade.

As she valiantly fights you can't help notice the vultures circling like gay media waiting for the next opportunity to pick a transgender person apart.

There is a response online. I begun a petition asking that Logo drop RuPaul's drag race for his sensationalistic commercialization of "tranny". Although there are only a few signatures at this time they are from all over the world representing not just US activists but a consensus from our worlds population.

Tranny hurts.
Posted by planetransgender at 9:36 AM 2 comments: