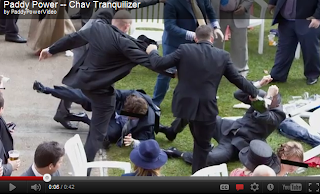 The ad which was supposedly approved by the UK transgender group Beaumont Society has been pulled by the major television broadcasters after Clear Cast reversed itself and declared it's disapproval of the ad.

This is a huge victory for transgender people because it shows that we have become accepted and respected by society in general. The power of people. This makes us off limits to immoral entities like Paddy Power.

But according to the Paddy Power blog they're not done yet. To fill the vacuum left by the Transgender Victors they have identified a portion of society even less protected. Evidently "Chavs" are a social outcast in British culture and Paddy Power means to capitalize on that fact using brutality and murder.

Is violence and the sexual degradation of woman all that Paddy Power understands? Have they no dignity or self respect?
Posted by planetransgender at 10:37 PM No comments: Links to this post