Gender Rights Maryland: You are welcome here if you agree with us

I was flabbergasted with Gender Rights Maryland board member Dana Beyer's response to my query as to why I had not been allowed to join GRM Facebook group.

And if you are like us. If you look like us. If you do not have a different view point. If you simply STFU and applaud whatever we do regardless of how devastating it will be for you. Then you may join, otherwise we give you permission to speak else where.

Because you are not a ally if your opinion is even slightly different.

The leadership bringing you the latest Jim Crow laws have a few things in common with their predecessors. They are rich so even though there is no racial delineation there social status all but eliminates the influences these Jim Crow Laws will have on there lives. And boy, they flaunt it like a 1%'er would.

And who could forget when Gender Rights Maryland board member Mark McLaurin called me a " Circus Freak" for taking credit for our success defeating HB235, the 2010 bill without public accommodations Equality Maryland failed to shove down our throats?

“Ohhhhh so it wasn’t spineless lawmakers who killed the bill

but rather your uncannily strategic merry band of out of state circus freaks who, heretofore havent been able to organize anything more complex than a Sunday brunch at the local Denny’s ????? Now THAT is funny !!!!! Looooooooool !!!!!”

But now it appears that gender rights Maryland AKA Equality Maryland is going about it piecemeal until Jim Crow becomes a social conscript, again.

And dissent on the GRM facebook page by members leads to one response. 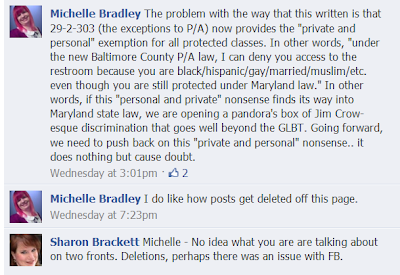 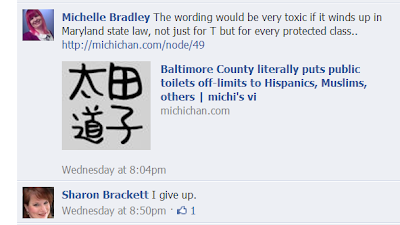 If you are transgender, you may work in Baltimore Maryland, but expect no respect.
Posted by planetransgender at 8:31 AM 1 comment: Links to this post