Hennepin County Attorney: Do Not Prosecute Cece McDonald For Being a Black Trans Woman

Cece's hearing is scheduled for April 24th. We will "STAND OUR GROUND" with Cece! 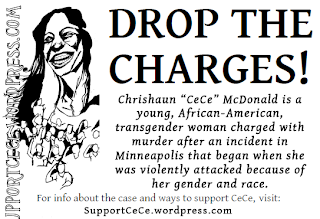 From the Petition: "Last summer, CeCe McDonald, a young African American transgender woman, was violently attacked in the heart of South Minneapolis. As she and several friends, also African American and queer or allied, were walking to the grocery store, a group of white adults standing outside of a bar started shouting racist and transphobic insults at them, calling the youth "faggots," "niggers," and "chicks with dicks". Tragically, the violence did not stop there- one of the white adults slashed CeCe across the face with a broken bottle, cutting all the way through her cheek, and another of the attackers was fatally stabbed. Amazingly, in the aftermath of this racist and transphobic attack, the only person facing charges is CeCe McDonald- the victim. Michael Freeman, the Hennepin County Attorney, has charged CeCe with two counts of second degree murder. Because of these charges, she has been unable to recover from the attack and prevented from continuing her studies at the Minneapolis Community Technical College. Considering that County Attorney Michael Freeman has dropped charges in similar situations this year and that he has advocated strongly for programs to keep kids in school, arguing "We all know that when kids miss school they don't learn," why is Michael Freeman ruthlessly going after this young student? We refuse to allow racism and transphobia, on Minneapolis streets or in Minneapolis courts. We support CeCe. We are waiting for County Attorney Michael Freeman to honor his commitment, in his words "to serve all of our citizens with understanding, dignity, and respect" by dropping the charges against CeCe McDonald."

Source: Support Cece Wordpress While Chrishaun “CeCe” McDonald is being prosecuted for murder after being violently attacked for her race and gender, Freeman’s office recently declined to prosecute the killer of Darrell Evanovich, a black man who was shot dead by a white man after an alleged robbery. While no person should be thrown to the mercy of the soulless, so-called “justice” system, the fact that CeCe is on trial after being assaulted, while a white man who killed someone after chasing them down is touted as a “good Samaritan,” highlights the racist and transphobic nature of the prosecution of CeCe. Hennepin County Attorney Michael Freeman and Marlene Senechal have the power to drop the charges against CeCe. So far, though, he has implicitly sided with CeCe’s white supremacist attackers by failing to acknowledge the racist, transphobic assault that she survived as a mitigating factor in the unintentional death of Dean Schmitz.

When: ALL DAY Where: From home, work, wherever you find yourself!

Remember to remain polite but assertive. Some key points to mention in your calls, emails, and faxes are:

•Identify yourself as a supporter, friend, family member, or community member calling about Ms. Chrishaun McDonald’s case.•Tell the County Attorney’s Office why you’re concerned: Ms. McDonald was the target of a hate crime, but she was singled out for aggressive prosecution after the attack.•County Attorney Freeman has declined to press charges in cases like this at least three times already this year. Remind him that he has the power to drop the charges against Ms. McDonald.•Tell Freeman and Senechal not to side with Ms. McDonald’s white supremacist attackers: drop the charges against Ms. McDonald.Tell Hennepin County Attorney Michael Freeman and Assistant Attorney Marlene Senechal to take a stand against hate, racism, and transphobia. Tell Freeman and Senechal to DROP THE CHARGES against Chrishaun McDonald!

Please send us an email us at mpls4cece(a)gmail.com to let us know you called/emailed/faxed in!


Visit Support Cece Wordpress to find out more on how you can stand your ground with Cece!
Posted by planetransgender at 6:34 PM No comments: Links to this post