Integrity USA Begins Pride Month With Focus on The "T" 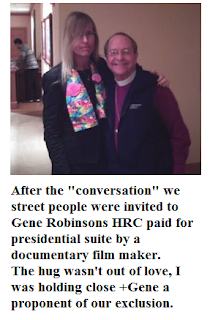 We invited Bishop Robinson to his first ever "transgender conversation" in 2008 following the exclusion of trans people from ENDA. We wanted to understand his statement in regards to gay people leaving us out of ENDA "A Half a love is better than none at all". It took place inside of the HRC Black Tie Dinner in Dallas Texas in Lu of our protesting the fundraiser.

I was upset that Bishop Robinson had refused to take the podium, instead took the the chair of our one and only gay panelist, a black man. He then refused to speak directly on his position regarding transgender inclusion in work place non discrimination laws. Afterwards in his luxury suite I asked him about this and he became quite agitated. Recognizing it would be better to continue the conversation at a later date I asked if we could.

Bishop Robinson simply answered "Why should I".

It became obvious to us at the conversation he had a long ways to go to accept us as equals in gods eye, but as evidenced by this video Bishop Robinson has come a long ways since 2008.

Integrity marks the beginning of Pride Month with the June 1st release of "Voices of Witness: Out of the Box" – the groundbreaking documentary giving voice to the witness of transgender people of faith. Courageously inviting the viewer into their journeys, the film is ultimately a celebration of hope and the power of God's love to transcend even seemingly insurmountable obstacles. Produced by Integrity’s Communication Director Louise Brooks, the film is being offered as a gift to the Episcopal Church as a resource for both teaching and transformation.


"Gender identity and gender expression are issues that can easily be misunderstood and cannot be wrapped up in a neat little box,” said Brooks. “So the goal of “Out of the Box” was to answer some of the most frequently asked questions. We have been blessed by a truly amazing cloud of witnesses who shared their stories and their lives with us. It has been a privilege to work with them to take this project from a dream to a reality as we offer their voices of witness to the church and to the world.”


"I believe God is calling us into this conversation now,” said New Hampshire Bishop Gene Robinson, one of the voices featured in the project. “It is an opportunity to get to understand another part of God's never-ending diversity and another way to live into our baptismal calling to love all God's children."

The third in the Voices of Witness series, “Out of the Box” was released on the IntegriTV YouTube Channel on Friday, June 1st. It will also be distributed to every bishop and deputation prior to the 77th General Convention of the Episcopal Church meeting in Indianapolis in July, along with a study guide written by the Rev. Gary Hall.


“Making ‘all’ mean ‘all’ is the foundation of Integrity’s platform for General Convention 2012,” said Jon Richardson, Integrity’s VP for National Affairs. “And partnering with our TransEpiscopal allies to complete the work of adding gender identity and expression to our non-discriminations canons is part of the work “Out of the Box” will help us do.”


Posted by planetransgender at 7:17 AM No comments: