Will Madonna's St. Petersburg Concert Be the Mother of all Pussy Riots? 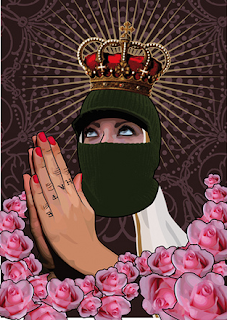 The world holds it's breath for Madonna's August 9th St. Petersburg Russia concert. Will the material girl be good to her facebook pledge and speak against the newly enacted draconian law criminalizing "the propaganda of male homosexuality, lesbianism, bisexuality, transgenderism among minors" despite being threatened with legal action and possible arrest? Its my belief she will and it's my prayer that she does so while wearing a balaclava, the trade mark of the feminist punk rock group Pussy Riot who's current trial for freedom of speech has been called Worst Than Stalin Era Trials. 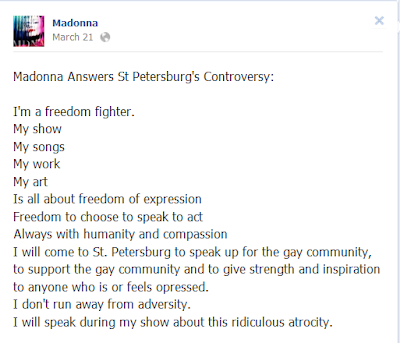 The law author — Vladimir Putin’s United Russia deputy Vitaly Milonov "said Madonna and her concert organisers are most likely to face fines and that he “will have to attend her concert to monitor the concert’s moral content”. Previously Milonov mentioned he had planned forbid rammstein concerts in Saint-Petersburg." 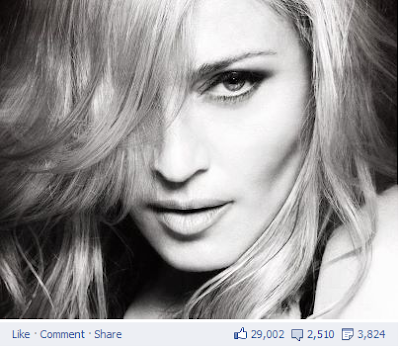 "Together with his colleagues Vitaly Milonov is planning to introduce a bill to the Russian State Duma banning “homosexual propaganda” across Russia. “United Russia” has a majority in State Duma, and rights activists fear that such federal law could pass."

So what has Putin to fear? Obviously he's afraid of something. I think it's freedom of expression. Freedom of speech but as some one said "You can't jail an idea".
If Madonna does speak out as I believe she will, it's my hope when she does speak out against the repressive goverment in Russia that her fans are also wearing balaclavas.

Madonna hasn't shied away from controversy in the past. I hope its a all out Madonna style Pussy Riot!

Vietnam a country so foreign is not so different as it turns out. August 3rd,4th, and 5th 2012 mark the inaugural Viet LGBT pride. What so struck me when reading the Viet Pride 2012 homepage was that it featured a video of Barack Obama's Pride Month opening remarks, the first time to my knowledge any United States President declared in a speech, transgender deserve to be treated equally.

I think our countries have a lot more in common than the war we waged on them. We are one people united in LGBT.