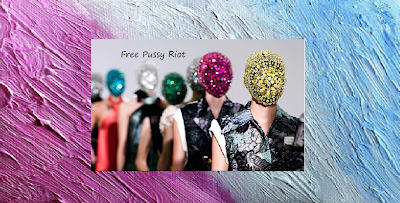 A lot can be said about Pussy Riot's motives but one thing is clear. They are sacrificing themselves for our world community of gender variant peoples. And its time we show our appreciation and support before time runs out. Look at the countdown time to the right. We only have hours to do this before the 'court' hands down it's 'verdict' in a 'trial' that:

Did NOT allow the Defense witnesses!

That did not allow the Defense to present Evidence!

That the judge did not once acknowledge by a glance the accused!

THE LGBT PEOPLE WORLD WIDE MUST STAND WITH

Here are a few things we can do:

Posted by planetransgender at 8:06 AM No comments: