Transgender Equality Network of Ireland understandably has taken offense to this video. It's not a leap from 'first bar' to 'really bad choice' to 'big mistake' to 'fake woman'. The response from Meteor who undoubtedly designed the advert for the free exposure courtesy of trans backlash, was measured but flawed.

TENI has kicked off a Twitter Campaign with the hashtag #MeteorShame.

They acknowledge they purposely employed a drag queen, who will undoubtedly come to their defen$e, but made they mistake of saying she was not intended to portray a LGBT person. What? A tall ugly woman? Not, that would be socially unacceptable, so why is a drag queen acceptable? It's not.

According to the Irish Times The Eircom-owned mobile phone company said it had not received any direct complaints and offered this statement:

“The actors used in the advertisement are professional drag artists and are not intended to portray or represent the LGBT community in a negative light or context,” Meteor said. It added that the male wifi user “does not look in any way uncomfortable or compromised by the fact he is dancing with the drag artist”.

Here we go again. Whats with the UK and transphobic advertising? And what's with all these unscrupulous drag queens?

Dislike the video on YouTube and file a complaint with here.
Posted by planetransgender at 10:23 AM 2 comments: Links to this post

We are ALL Pussy Riot! Trans and Punk Folk RISE UP 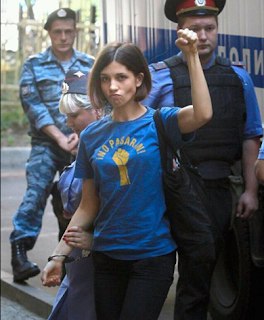 Fear must not hold me back. I didn't know anything about 'punk'. All I knew of the word was in early days of transition when my gender expression fell so far out of the binary I was threatened with the word 'punk'. Not figuratively, but in reality in a dark parking lot by a very large black man.

I knew I wasn't punk, I was afraid of the word afraid of conflating it with transsexualism, but most of all I was afraid of what my friends would think if I was to come out of the closet. Contrary to what haters would have you believe many in the trans community are very 'rule' conscious, like me.

Including the cornerstone rule of being transgender. Be true to yourself. Punk Rocker Louise Distras caught my eye just now as I was checking the twitter hashtag #Pussyriot "we are all Pussy Riot" an idea I have been trying to introduce to our trans community for some time.

Posted by planetransgender at 5:28 AM No comments: Links to this post