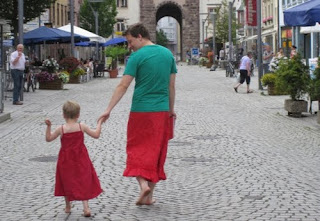 This has to be the most awe inspiring hope giving man of the year, ever.

I really, REALLY wish you could read this article about a father who started wearing skirts because his son likes to wear skirts and dresses and he wants his son to feel stronger Like, holy shit, the end made me feel so happy
I took the liberty to translate the text.
Please note that it’s not a word to word translation.

Sometimes men simply have to be role models.

Because his son likes to wear skirts Nils Pickert started with it as well. After all, the little one needs a role model. And he thinks long skirts with elastic bands suit him quite well anyways. A story about two misfits in the Province of southern Germany.

My five year old son likes to wear dresses. In Berlin Kreuzberg that alone would be enough to get into conversation with other parents. Is it wise or ridiculous? „Neither one nor the other!“ I still want to shout back at them. But sadly they can’t hear me any more. Because by now I live in a small town in South Germany. Not even a hundred thousand inhabitants, very traditional, very religious. Plainly motherland. Here the partiality of my son are not only a subject for parents, they are a town wide issue. And I did my bit for that to happen.

Yes, I’m one of those dads, that try to raise their children equal. I’m not one of those academic daddies that ramble about gender equality during their studies and then, as soon as a child’s in the house, still relapse into those fluffy gender roles: He’s finding fulfilment in his carrier and she’s doing the rest.

Thus I am, I know that by now, part of the minority that makes a fool of themselves from time to time. Out of conviction.

In my case that’s because I didn’t want to talk my son into not wearing dresses and skirts. He didn’t make friends in doing that in Berlin already and after a lot of contemplation I had only one option left: To broaden my shoulders for my little buddy and dress in a skirt myself. After all you can’t expect a child at pre-school age to have the same ability to assert themselves as an adult. Completely without role model. And so I became that role model.

We already had skirt and dress days back then during mild Kreuzbergian weather. And I think long skirts with elastic bands suit me quite well anyways. Dresses are a bit more difficult. There was either no reaction of the people in Berlin or it was positive. In my small town in the south of Germany that’s a little bit different.

Being all stressed out, because of the moving I forgot to notify the nursery-school teachers to have an eye on my boy not being laughed at because of his fondness of dresses and skirts. Shortly after moving he didn’t dare to go to nursery-school wearing a skirt or a dress any more. And looking at me with big eyes he asked: “Daddy, when are you going to wear a skirt again?”

To this very day I’m thankful for that women, that stared at us on the street until she ran face first into a street light. My son was roaring with laugher. And the next day he fished out a dress from the depth of his wardrobe. At first only for the weekend. Later also for nursery-school.

And what’s the little guy doing by now? He’s painting his fingernails. He thinks it looks pretty on my nails, too. He’s simply smiling, when other boys ( and it’s nearly always boys) want to make fun of him and says: “You only don’t dare to wear skirts and dresses because your dads don’t dare to either.” That’s how broad his own shoulders have become by now. And all thanks to daddy in a skirt.

Posted by planetransgender at 8:14 AM No comments: Links to this post