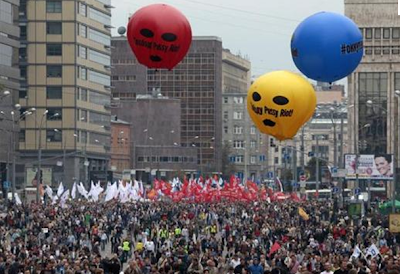 Thousands of Russians march under Pussy Riot balloons during the September 15th protest.

What was the result of the absurd 2 year Pussy Riot sentence? Some experts say it is a sure sign Putin wants to return Russia to a Soviet state. This has not gone unnoticed by Russians who rightfully are upset after a brief taste of democratic reforms.

It has not gone unnoticed by myself after struggling years to establish contact then friendships with transgender people within Russia. Now we are facing the prospect of losing contact with our friend there.

In Moscow? Join the demonstration at the Moscow City Court at 11:00am.

Posted by planetransgender at 4:34 PM No comments: Links to this post