Voted Today For The First Time! 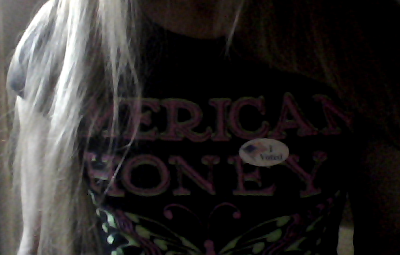 I just voted, see my sticker! Yes, and for the first time. I registered last presidential election but was dissuaded by a very official letter.

It said the my name and gender marker didn't match with federal records. I was afraid that I would further complicate my life by answering that letter. So I didn't vote, but this year...

I took my narrow self down to the county voter registration center and made the lady give me exactly what I needed to change my home from Dallas County to Tarrant county.

I voted for Obama. He signed a decree directing Social Security to stop sending my employer a letter demanding them to explain why I was female but their records showed me as male.

Ohio won't amend my birth certificate bless there hearts. So thanks to Obama I am at least working again, albeit at half what I was before transition.

Now if the democrats would stop sending a 'record' asking, no make that demanding I send them money because I did last election.

Wonder if they'd come and pay my electricity and gas bill this month because its going to be tight.

But it beats the hell out of living on the streets, again.