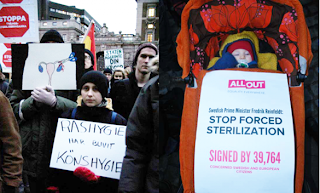 Its Payback Time in Sweden!
[VIA TGEU'S TRANS-INFO-EUROPE EMAIL LIST]

"A coalition of Sweden's LGBTQ and Trans* organizations have joined forces to bring justice to Trans* and Gender Variant people in Sweden. In an outstanding class action law suite under the leadership of civil rights attorney Kerstin Burman the Swedish Government will finally have to face the cost for the forced sterilizations of Trans* and Gender Variant Swedish citizens who for decades have to undergo sterilization and in order to enjoy the basic human right have their gender legally recognized."

"Attorney Kerstin Burman will represent the claims of well over 100 victims of forced sterilization in Sweden. The Swedish Government has as a result of an earlier legal action accepted to pay compensation to the victims of forced sterilization between 1935 and 1975. The victims were mainly Roma and Traveler women as well as persons with disabilities and single unmarried women with low income. I'm proud to say that I'm joining my fellow Trans* and Gender Variant victims in this legal battle. Finally the time has come for the Sweden to pay for decades of injustice and human rights violations to our people!"

"In Sweden most transgender individuals are denied the right to change their legal gender. Under the provisions of the present law, Lagen om fastställelse av könstillhörighet i vissa fall ( SFS 1972: 119) only those individuals who have undergone treatment by one of the six regional gender teams will be granted the right to change their birth gender.

According to this law the applicant must be a Swedish citizen, unmarried and sterile and above the age of 18. With the application a statement by the treating psychiatrist must be submitted that the patient meets the criteria in WHO ICD-10 F.64.0 and that this condition has prevailed since the patients youth. This is in effect a stricter diagnostic criteria than that present in the ICD-10." - Transgender Health Sweden


This is nothing less than genocide.

Posted by planetransgender at 7:28 AM 2 comments: Links to this post