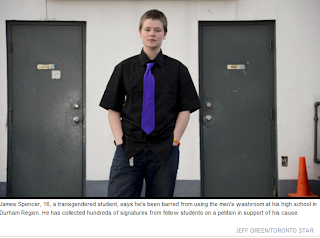 James can't quite understand what the hold up is.

According to news reports he has been denied the use of the public facilities that correspond with his gender expression by the Kawartha Pine Ridge District School Board. . That discriminatory policy is in stark contrast to the welcoming environment established by the nearby Toronto School board.

James has gathered signatures on a petition from over half of the students at the school asking that he be allowed to use the men's room. Seem's simple enough.

But the school continues to drag their feet saying they need time to evaluate the situation and educate the students. In the mean time they have segregated James further acerbating his situation. Seems the students are trying to educate the board. If only they'd listen.

More at The Star.com
Posted by planetransgender at 10:48 PM No comments: Links to this post