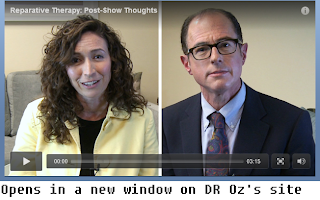 1000 Gay organizations screamed bloody murder over DR Oz Reparative Therapy show wondering why he would raise the level of creditability with conversation of such disproved quackery with this show.

Something I as a transgender person was wondering to....

But then after the show and the inevtable payola rolled in OZ Claimed he seen the light. Well #ucking Hallelujah.

He posted this on his Dr Oz blog:

On today’s controversial show, we discussed forms of therapy that are designed to turn a gay person straight. Currently, there are still a handful of therapists who still perform this on teenagers and adults who are uncomfortable with their sexual orientation – despite the fact that the American Medical Association, the American Psychiatric Association, the American Academy of Pediatrics, the American Counseling Association, and other respected medical organizations oppose this therapy, claiming that it doesn’t work and that it may be potentially harmful.

I felt that we needed to include all parties who have considered reparative therapy to hear the stories of people who have tried these treatments. Although some viewers may disagree with this tactic, if we want to reach everyone who might benefit from understanding the risks of this therapy, you have to present multiple perspectives. Based on the need to pass the September 30 California law banning the practice in minors and continued media attention on groups advocating both sides of the reparative therapy decision, the debate continues and the venues are often basements and backrooms.

Some guests argued that they have been changed through these treatments, but I was overwhelmed by the pain of individuals hurt by the experience. After listening to both sides of the issue and after reviewing the available medical data, I agree with the established medical consensus. I have not found enough published data supporting positive results with gay reparative therapy, and I have concerns about the potentially dangerous effects when the therapy fails, especially when minors are forced into treatments.

My biggest epiphany occurred after hearing where the opposing groups found some common ground. The guests who appeared on my show on either side of this debate agreed that entering into any therapy with guilt and self-hate is a major error. Trying to change who you are instead of loving who you are leads to broken spirits and broken hearts. Encouraging self-acceptance is the only way to help alleviate the shame experienced by those who are struggling with their sexuality – and help them reach a place where who they are matches who they want to be."


Being a blogger and student I appreciate you that you have a cerebral cortex but abhor your greed. Fuck.

American Psychiatric Association: “The potential risks of ‘reparative therapy’ are great, including depression, anxiety and self destructive behavior, since therapist alignment with societal prejudices against homosexuality may reinforce self hatred already experienced by the patient.”

American Psychological Association: For over three decades the consensus of the mental health community has been that homosexuality is not an illness and therefore not in need of a cure.

American Academy of Pediatrics: “Therapy directed specifically at changing sexual orientation … can provoke guilt and anxiety while having little or no potential for achieving changes in orientation.”

National Association of Social Workers: Social stigmatization of lesbian, gay, and bisexual people is widespread and is a primary motivating factor in leading some people to seek sexual orientation changes


The Epiphany "DR" Oz had was he was in serious danger of losing his biggest fan base by lowering himself with such self promotional crap.
Posted by planetransgender at 11:19 AM No comments:

The Charlottesville Police Department needs your assistance regarding the disappearance of
Dashad Laquinn Smith.

Smith was last seen on Tuesday, November 20th. Smith had phone contact with Erik Tyquan McFadden (Facebook picture included) on that day and then told friends he was going to meet someone on West Main Street. He was seen a short time later in the 500 block of West Main Street.

Smith has not been seen or heard from since. Erik McFadden, who at the time was living on 14th Street NW, confirmed to investigators that he did have phone contact with Smith and planned to meet him on Tuesday near the Amtrak Station on West Main Street.

McFadden stated the meeting never took place. Police have reason to believe that McFadden has now left the Charlottesville area.