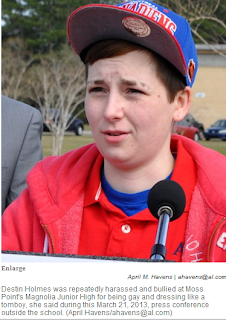 Targeted with hateful slurs by staff and students, being forced to use the wrong restroom  Destin Holmes was forced to leave junior high school. But she's back and she brought friends.

It's a story all too familiar to trans students. Hateful people could care less why a person belongs to the LGBT community, be it Gender variance or sexual orientation. Its all the same to Moss Point Mississippi Magnolia Junior High school principal, staff and students who were targeting Destin because she was a convenient outlet to vent there feelings of inadequacy and frustrations with life.

VIA EMAIL AND FIRST CLASS MAIL

We have been retained by Destin Holmes and her family concerning severe and pervasive harassment Destin experienced during her time at Magnolia Junior High School (“Magnolia”). Destin was formerly an eighth grade student at Magnolia, where she was enrolled from August 15, 2011 until March of 2012. During the seven months Destin was enrolled in the Moss Point School District (“the District”), Destin was targeted for harassment by school administrators, teachers, and other students based on her sexual orientation and gender expression. The harassment began immediately upon

her arrival at Magnolia and intensified following notification by Destin’s family to the principal (“Principal Peyton”) and the Moss Point School District Superintendent at the time, John Ladner. Destin found respite only after she left Magnolia, a decision made after harassment continued unabated and Principal Peyton told Destin during an in person meeting in March of 2012, “I don’t want a dyke in this school.”

School Officials Unlawfully Blamed Destin for the Harassment Against Her

Destin is a young woman who identifies as a lesbian and who wears clothing typically associated
with male-identified individuals—baggy jeans, polo shirts, and baseball caps. For the first three days Destin was enrolled at Magnolia she was repeatedly referred to as “he” by teachers although she repeatedly informed them that she was a “she.” Throughout the year, teachers and students called her “it,” “queer,” and “he-she” in front of other students. Destin was denied access to the girls’ restroom by teachers who knew that she was female. Students regularly called Destin anti-gay slurs with no reprimands from teachers. In one troubling instance, a teacher refused to allow Destin to participate in a classroom math activity in which teams were divided by gender, because, according to the teacher, Destin was “in-between.” Destin cried while the other students joined their groups at the sides of the classroom.

Instead of addressing the harassment and disciplining the students and staff who targeted Destin as a result of her orientation and gender identity, school officials blamed Destin as the cause of the harassment. Destin’s father and grandmother both met with Principal Peyton and Vice Principal Peyton on multiple occasions to report the harassment against Destin, but the bullying did not stop. Instead, Destin’s and her family’s reports led the school administration to further target Destin and blame her for the harassment she suffered. In October of 2011, Destin became so depressed about the hostile environment at school that she attempted suicide. During a meeting to address Destin’s treatment at school, Principal Peyton told her father that “if she’s going to dress like a boy, she’s going to be treated like a boy.” After repeated meetings, in March of 2012, Destin’s grandmother sent a letter to the Mississippi superintendent of schools, the Moss Point School District superintendent, and Principal Peyton describing the harassment against Destin and Principal Peyton’s inappropriate response. Even after such reports, the hostility persisted and Destin was forced to withdraw from school.

Our Investigation Shows that LGBT Students, and Those Perceived as LGBT, are Subjected to a Hostile Environment

Our investigation into complaints of anti-gay hostility in the District, including interviews with other students, confirms that lesbian, gay, bisexual, and transgender (“LGBT”) students and those perceived as LGBT are subjected to a hostile environment that robs them of equal educational opportunity. School officials routinely ignore severe and pervasive anti-LGBT harassment. Rather than addressing bullying, school officials have blamed the students who suffered harassment and often punish them for defending themselves. Officials have also placed LGBT students in educational isolation for extended periods after reporting harassment. Several LGBT students report being told to “suck it

up” by school administrators after alerting them to the harassment they faced. Notice from families and others has been ignored. Despite being notified of the problem, the District has failed to take adequate measures to address the severe and pervasive environment of harassment aimed at Destin and other LGBT students.

School authorities’ failure to adequately respond to Destin and her family’s complaints of ongoing harassment violate established law and Destin’s constitutional rights. The Fourteenth Amendment provides that “[n]o state shall ... deny to any person within its jurisdiction the equal protection of the laws.” U.S. Const. amend. XIV, § 1. This guaranty prohibits a school from singling out any group of students for disfavored treatment based on their membership in an unpopular minority. Doing so sends a message that LGBT people do not deserve the opportunity to learn alongside their heterosexual peers. This violates federal law. School officials have been held liable if they turn a blind eye to harassment experienced by LGBT students. In Flores v. Morgan Hill Unified School District, 324 F.3d 1130 (9th Cir. 2003), after almost five years of litigation, a school district agreed to a sizeable monetary settlement and a three-year consent decree that required extensive policy changes and training. In Nabozny v. Podlesny, 92 F. 3d 446 (7th Cir. 1996), a district that initially refused to address anti-gay harassment eventually agreed to substantial money damages for a former student who had endured anti-gay harassment.

Title IX additionally prohibits sex discrimination by any school that receives federal funding. See 20 U.S.C. § 1681 (“No person ... shall, on the basis of sex, ... be subjected to discrimination under

Additionally, Destin’s treatment violates Mississippi law that protects against hostile school environments and prohibits disciplinary procedures against students who become involved in altercations as a result of a continued pattern of bullying.2 Mississippi law requires school authorities to protect students like Destin who may be more likely to be perceived as disruptive when they are merely responding to continued harassment.

To Remedy the Discrimination Against Destin and Other Students, the District Must Enact a Comprehensive Plan to Address Anti-LGBT Harassment


Destin wants to go back to school in Moss Point, but she cannot return to an environment where she is targeted because of her sexual orientation and gender expression. The District has a responsibility to ensure that Destin and students like her have an opportunity to learn in a respectful environment. Consequently, the District must take appropriate measures to remedy the anti-LGBT hostility as

it not only endangers Destin but also constitutes impermissible discrimination. An appropriate response is not merely to address individual instances of discrimination as they occur, but rather
to implement a plan to comprehensively address the hostile environment. As the U.S. Department of Education instructs, “[b]y responding to individual incidents of misconduct on an ad hoc basis only, the school fail[s] to confront and prevent a hostile environment from continuing.”3 Thus, it is the responsibility of the District to implement a plan to ensure that Destin and students like her are not singled out for mistreatment due to their real or perceived sexual orientation or gender identity. Merely reacting to incidents when there is a pervasive pattern of discrimination does not satisfy the District’s legal obligations.

One year ago, the Southern Poverty Law Center resolved a case on behalf of several students like Destin who faced a similar hostile environment in the Anoka-Hennepin School District in Minnesota. Those students experienced anti-LGBT harassment that the district failed to address. SPLC filed a federal lawsuit and the district eventually agreed to a five-year consent decree with federal oversight. The decree features a multi-faceted plan to improve the school climate and systemically address bullying and harassment as well as a monetary award.

Without prompt and meaningful action to remedy the hostile environment against LGBT students
in the Moss Point School District, we intend to file a federal lawsuit seeking full redress for Destin as well as attorneys’ fees and costs. If the District wishes to avoid litigation, we welcome an opportunity to meet with District representatives and discuss potential solutions. We are available for an in-person meeting during the remainder of March or early April.

Thank you for your careful attention to this important matter. Sincerely,

Posted by planetransgender at 5:42 AM

This is horrible! THE worst case of unequal, irresponsible, insensitive, dangerous behavior I have ever seen by people who are supposed to be responsible adults!