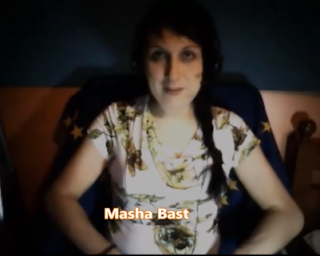 Russian lawyer and the Chair of Association of Russian Lawyers for human rights Evgeny Arkhipov announced officially that she is a transgender MtF and her name is Masha Bast.

Masha Bast reminds, that she is the lawyer of Alexander Kamensky in Bolotny case, Manezhnaya case , “primorskie partizany”, "about the attempt on Putin’s life" and other political cases. Also Masha Bast continues the protection of transgender Roman Sorokin, who had asked political asylum in France.
Currently, Masha Bast officially married. Masha Bast is undergoing hormone therapy and plans a series of operations.
As Masha Bast told, everybody may follow news about her life and family: Masha Bast and Julia Guseinova will keep a diary of their life on facebook

Masha posted this to her timeline:


"Bast, who is undergoing hormone therapy and plans to implement a number of surgical gender reassignment, is married to Julia Guseynovoy, head of the press service of the Russian Association of Lawyers for Human Rights. According to the couple, they are not going to give up, though, after a legal change of sex marriage will terminate. However, as reported Gay.Ru Huseynov, after receiving the documents for Maria girl's name, the marriage will be renegotiated abroad - in one of the countries where it is legal. On her coming-visite Maria Bast said on the social network Facebook, and promises her wife to lead blog, talking about the events of his life and work."

Posted by planetransgender at 2:06 AM


I have appreciate with getting lot of good and reliable and legislative information with your post......
We provide zealous representation for our clients from intake throughout trial. If you find yourself in need of legal representation, do not hesitate to contact our office Houston Criminal Defense Attorney