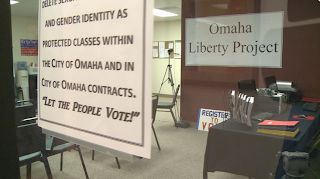 A WIN For LGBT people and Omaha Churches!

A few months ago I busted Patrick Bonnett of the Omaha Liberty Project for trying to frighten the cities faith community by saying there freedom of religion was under attack.

The people listened to us, read the bible for guidance and refused to sign Liberty project's petition to force a referendum in the spring.

Omaha's faith community understood you were lying hoping to ferment hate. That's why you failed Bonnett.

The people of Omaha understood it wasn't religion Bonnett was worried about. He was and still is troubled LGBT people and especially trans people like myself could have equal opportunities in Omaha. Bonnett promises to keep  hating and will continue the fight against me.

Bring it on Bonnett.

Posted by planetransgender at 11:01 AM No comments: Links to this post