Ravens Superbowl Champion Brendon Ayanbadejo on Transgender Rights: If a man wears womans clothes and is really a man, who cares? 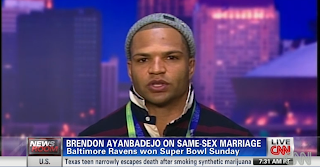 I honestly believe Ayanbadejo ether lacks a understanding of transgender people or was talking about cross dressers. In ether case it was a tragic faux pas at a crucial moment stereotyping transgender people as really men or woman who dress in the opposite sex's clothing. Can we help to understand who we are? Yes we can! (did someone say that before?) Heres Brendon's facebook fan page. Show some love. Be nice, help educate Brendon.